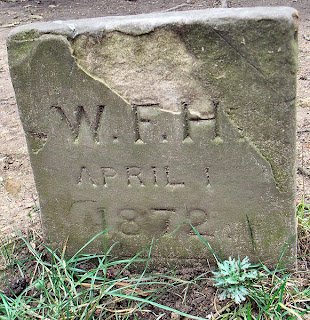 The gravestone of William Frederick Horry in Lincoln Castle.
William Frederick Horry (Fred) was born in Boston in December 1843. While he was visiting Burslem in Staffordshire, he became friendly with Jane, the barmaid of the George Hotel in Burslem. Fred and Jane's friendship developed and in 1866 Fred and Jane were married and they took over the George Hotel.
Fred was a born innkeeper and his hospitality attracted customers from far and wide. Fred and Jane had three children within their first five years of marriage, but by September 1871 Fred had started drinking heavily. His drinking stemmed from jealousy of his wife talking to male customers in the bar. The alcohol fed Fred's jealousy, provoking more arguments and anger and eventually his drunken accusations destroyed their marriage and in September 1871 Jane left him and took the children and herself to Horncastle Road, Boston, the home of Fred’s father.
Fred visited Boston a few times, to see his wife and children, but even his own father barred him from the house because of his aggressive behaviour. As Fred could not manage the Hotel on his own, he sold it and moved to Nottingham. Fred bought a gun in Nottingham and travelled to Boston, intent to kill Jane, he thought if he could not have her then no one else would. He went again to Jane and begged her to come home with him, but when she refused he shot her dead. After shooting her he did not attempt to escape but simply said, “I have done for her”,
At the trial he pleaded insanity but the prosecution proved that he had purchased the gun in Nottingham on his way to Boston, showing that the crime was pre-meditated. Fred was 28 years old when he was found guilty of murder and the Judge instructed that William Fredrick Horry was to be hanged in Lincoln Castle the following Monday. Immediately the verdict was announced his friends, in Burslem and in Boston, launched appeals for a reprieve, but Fred was not interested and only wanted to be reunited with Jane.
He was hanged at Lincoln Castle on the 1st April 1872 by William Marwood who was performing his first execution. Marwood's fame as an efficient executioner spread after he reformed hanging by inventing the 'Long Drop'.
On the day of the execution there were astonishing scenes in Burslem. More than three thousand people lined the streets, from the George Hotel to St John's Churchyard, where an empty coffin was carried by his friends from the George. The Rector gave a sermon, saying that Horry, was "a martyr, more sinned against than sinning". Later, as a permanent memorial to Fred Horry, a granite obelisk was paid for by his friends, who erected it above his empty grave.
His actual body was interred in the Lucy Tower at Lincoln Castle.
Posted by Billy at 3:28 pm