From "A collection of epitaphs and monumental inscriptions, ancient and modern, 1802" 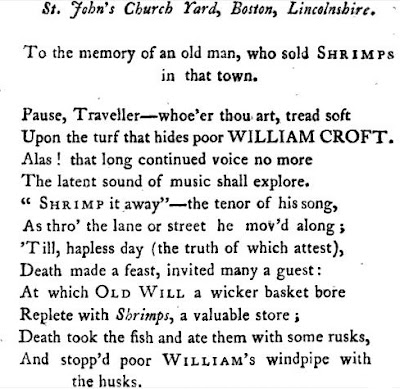 .
Below is from the London Evening Post of July 1912.
From "The cyclopaedia of anecdotes of literature and the fine arts. 1853". 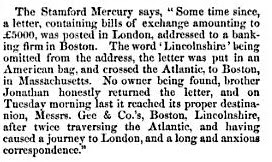 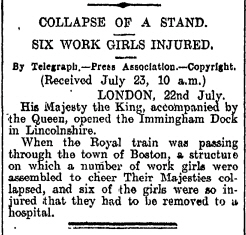 Thank you to Robin who wrote me saying "This event happened on an overhead walkway between two factory buildings in Witham Town, they were employees of Herman Nagele a German wig and switch maker employing 24 women. It seems that as the Royal Train was about to pass they all ran onto the overhead walkway causing part of it to collapse causing the injuries. The walkway can be made out 8 down on your post of 18/12/10 its connecting the two buildings of Newham & Co. Nagele also had a Hair Salon at 95 West Street and was married to Miss Best whos father had a large shop opposite Nageles in WestStreet. I am sure that you can remember Les Farrow the one time owner of the of license in Fydell Street (Johns TV repaires). One of the many tales Les used to tell was that when he was very young his mother heard that the King & Oueen would be passing through Boston, so she wrote to the King saying that my little boy Les has never seen a King or Queen and would they be good enough to slow the train to a stop on the Grand Sluice crossing and give her little boy a wave. I understand that she had a reply from the Palace and Les got his wave, this being only seconds before the Witham Town Accident".
﻿
Below is from the New York Times, May 1865.
At Boston, in Lincolnshire, England, it seems there is an old charter, or custom, or something or other, whereby the Mayor of the borough is at liberty, during Lent, to take a couple of eggs out of every basketful for sale in the market. Of late years the Mayor for the time being has very wisely restrained from exercising this privilege, and it was thought to be dying out. The present occupant of the chair, however, has insisted on his right, and great grumbling and indignation meetings are the result. Since his worship is so strictly legal, how would it be if the market people were to bring their eggs in in boxes? At all events, they might try the experiment, and if it failed they might still choose the Mayor by putting all their eggs in one basket.


St. Anne's Cross.
St. Anne’s Cross stood at the entrance of St. Anne’s Lane and was mentioned frequently between 1564 and 1712. In 1729 the cross was removed by the Corporation from a triangular piece of ground which was then paved, no remains of the cross exist.
Posted by Billy at 12:03 pm