I am thankful to Robin Smith who was born in Argyle St., Boston in 1939 for sending me these pictures and the information to go with them.

Mr Lammie was the Argyle Street Baker well before Tommy Sands took the business over. In the wartime a coach archway leading through the left hand side of building was designated as a public air raid shelter but I dont think it would have been of very much use if it had been bombed. The photo shows the founder of the business Mr W.H. Lammie outside his shop in about 1909/10.


Lammie's, Baker in Argyle St.
Jessie Jackson Taylor's grocers shop is now occupied by Bruces Ladies Hairdresser, Jessie worked for the gas works and the shop was run by his wife Louie and a Miss Alice Newton. The photo was taken in 1931 the two children are splashing about outside Taylors shop, just after a cloud burst had occured and overcome all the drains in the West side of the town. 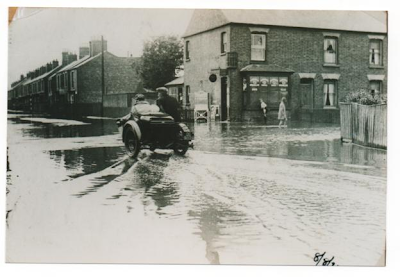 Carlton Rd. at the crossroads with Argyle St. and Fydell St.
Well down Fenside Road was a large house called Viatoris which was the home of Mr J.H.Simpson, I think that it may now be known as the Grange?. In 1899/1900 Mr Simpson and a small group of like minded people began to worship in the large greenhouse in his garden at the side of his house, They called it the Boston West Wesleyan Mission, here they also held well attended Sunday School classes. The congregation soon increased and in 1906 they built a new Mission Hall on Brothertoft Road on land at the end of Granville Street which was known locally as the Tin Tabernacle. In the 1940s the Congregation placed the Tin Tabernacle Mission Hall on rollers and pushed it down Brothertoft Road to the Zion site where it remained as the Church Hall for a number of years. 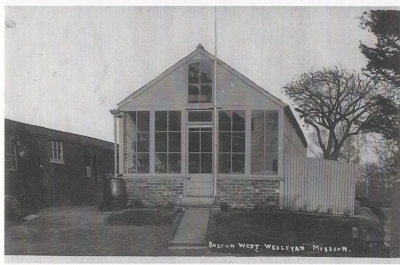 Boston West Wesleyan Mission down Fenside Rd.
You never see Tates in Graves along the sides of the fields anymore like the picture of Cannons in Punchbowl Lane shows. 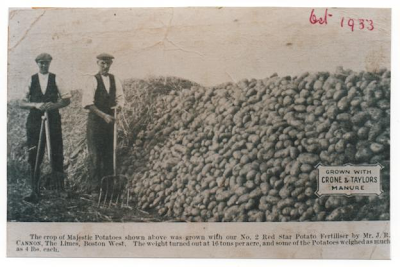 A potato grave down Punchbowl Lane.
Robin's pictures set my memory in gear and I remembered often as a teenager in the 1960's going out with a load of local lads in a gangers van in the freezing cold to the nearby fields where we would open up the "grave". This meant taking off firstly about a 12 inch thickness of soil and then a thickness of straw to get to the actual potatoes, we would then shovel them out with a screen (the forklike tools that the men are holding in the picture) riddle them on an old "Hurdy Gurdy" machine and bag them up at the end. The old machine had a large wheel with a massive strap connected to a smaller wheel (without a guard) and often came off and flew about dangerously. It's a wonder no-one was killed and we'd never heard of Health and Safety. Good old days.......
I also thought of Mr. Lee's Butcher's in Laughton Road, Mr Chester's shop in the same street, Tommy Emmerson's chip shop on the corner opposite to where the kids are paddling in the water and Mr. Berry's shop opposite that. Further up Fydell St. was Listers chip shop and opposite that Wade's Post Office, they've all gone now but the new road that leads from Fydell Street past Asda's to Sleaford Rd. is named Lister Way in memory of old Mr. Lister at least. Thanks again for some wonderful memories Robin.
Posted by Billy at 2:28 pm