Mill Hill was a cluster of buildings situated at the top end of Wide Bargate roughly opposite to the Red Cow pub on what is now a car park. In 1640 it is described as "one piece of waste land in Bargate whereupon was lately one windmill and tenement." In 1680 it is described as having "several tenements upon it." 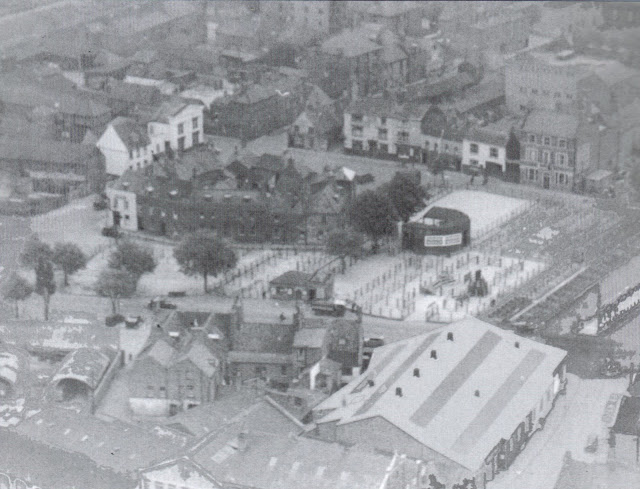 John Gray sent me this picture that clearly shows the island of buildings known as Mill Hill. Top centre can be seen the Ram pub and top right the Cross Keys pub now re-named the New England Hotel. Mill Hill was demolished in 1959.

Mill Hill during demolition. The curved white building was The North Pole pub. 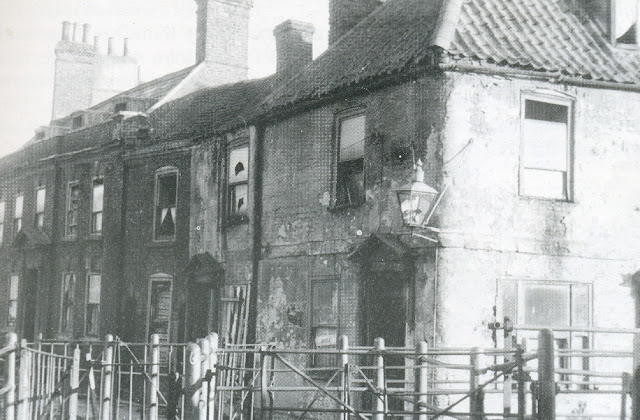 Another view of Mill Hill.

Cheyney Street was a street off Botolph Street, it went through Grove Street and then came out at the top of Wide Bargate near to Mill Hill. On the first house on the east side of Cheyney Street the builder put into the brickwork a stone in which the name "Cheyney Street" was deeply cut. He evidently didn't want the name to be changed or forgotten but there was no way he could ever imagine a huge dual carriageway running through the centre of Boston and Cheyney Street being destroyed in its path.
The name Cheyney was a name honoured in the town for generations and frequently occurs in Corporation records. From 1489 when William Cheyney held land belonging to the Corpus Christi Guild to 1798 when Thomas Cheyney died during his year of office as Mayor. In the list of Mayors during the reign of George III the name appears seven times. It would appear that Thomas was the last of the Cheyneys for there's no more mention of the name. The name Cheyney also appears in the list of names of early settlers in Massachusetts.


There was also a "Tom Cheyney" who kept an inn in Boston in the 1890's, either the Carpenters Arms in Witham Street or the Little Peacock Tap in School Street.
Posted by Billy at 12:37 pm