Arthur Morton, a Bostonian to remember.

Arthur Morton was born in 1872 in Boston. He started a mineral water business some time between 1901 and about 1910, as a sideline to a grocers, bakers, and provision merchants business he already owned at 70 Blue Street. By going into the grocery business Arthur was following in the footsteps of his father William, who had a grocers shop on London Road in Boston for several decades up to about 1920 (William was also the landlord of the Black Bull pub, next door to his shop). 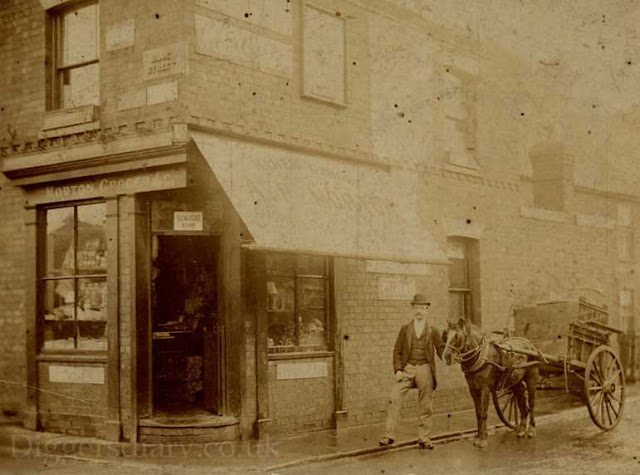 Above:
Arthur Morton outside the Blue Street shop, probably about 1909 or 1910, with his delivery cart pulled by his pony ‘Topsy’. Various enamel advertisements can be seen on the walls including Fry's Cocoa, Rowntrees Chocolates, and Colmans Starch.
Arthurs drinks business was entirely for fizzy pop. He used Penny Monsters bottles, stone flagons and 10oz codds. The codds, and possibly the flagons, had his own name on them, but the Monsters bottles were the standard ‘franchised’ type of one pint screw stoppered bottle, embossed ‘Monsters’ but without any proprietors name. 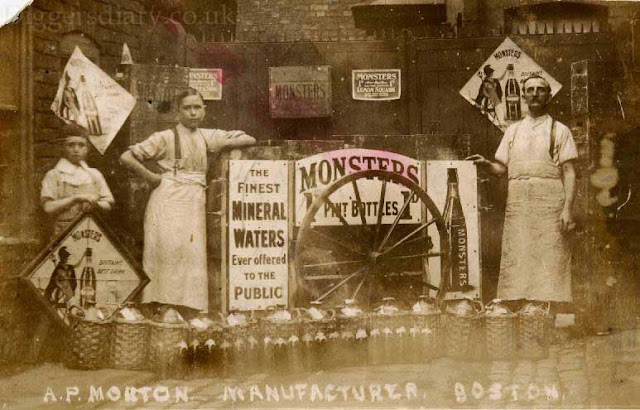 Above:
Arthur (on the right) in the yard of his mineral water business, also in Blue Street, some time in 1913.
Arthur was in the pre – 1914 equivalent of the Territorial Army, having joined while he was still a teenager in the 1890s. He was called up for active service abroad on the 10th September 1914, a month after the war started and by October 1914 (within a year or two of the photograph above being taken) he was on the Western Front with the 7th Division. He was a driver for 105 Battery of XXII Brigade Royal Field Artillery, and between October 1914 and September 1916 he was involved in most of the major British battles of 1914, 1915 and 1916 including 1st Ypres, Neuve Chapelle, Loos, Aubers Ridge, and the Somme. 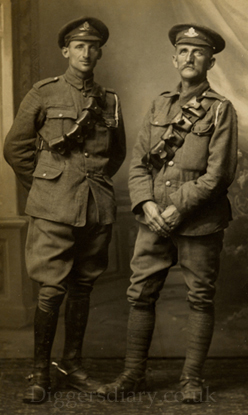 Above:
Arthur (on the right) in a studio portrait taken in France or Flanders, probably in 1915 or early 1916, along with his best friend of the time ‘Nobby’ Clark (or Clarke).
Arthur was invalided back to England in September or October 1916 after being incapacitated during the Battle of the Somme. He had shell shock (and possibly a head wound), and never fully recovered. Both his mineral water company and his grocers shop were already out of business before he returned to England. In 1917 his wife and children moved from Boston to Grimsby, where Arthur joined them after several months of convalescence at the Lord Derby War Hospital in Warrington, and then at the smaller hospital at Poulton-le-Fylde.
Arthur suffered badly from the effects of shell shock for the rest of his life. For several years he could only cope with quiet and low-intensity work. After spending several months in hospital he returned to his family in Lincolnshire. He managed to find a job as caretaker of the smallpox hospital in the rural setting of Laceby, near Grimsby. Eventually he moved on to other work, but he never again ran his own business. He died in 1937 at the age of 65, two weeks before he was due to retire. 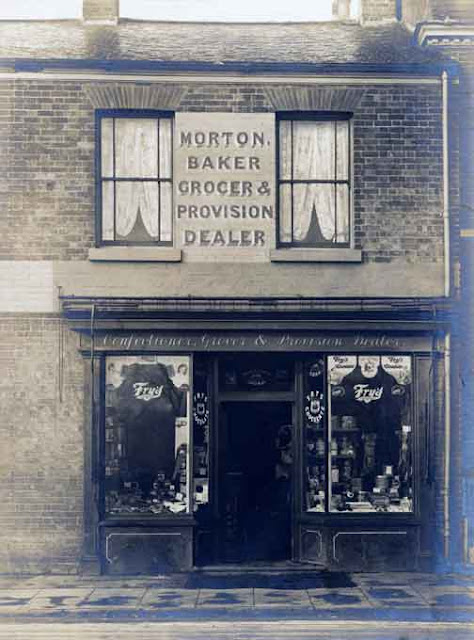 Arthur's Father, William Morton's shop on London Road, Boston, about 1918 - 1920. The taller building immediately to the left is the Black Bull pub, of which William was the landlord for many years. William died in 1920, and his shop was taken over by two of his daughters
(Arthurs sisters).
Posted by Billy at 1:49 am