Miss Eva Gray was a gypsy who, for almost 17 years, lived in a brightly painted caravan in the yard of the Crown and Anchor in London Road, Boston. She was a picturesque character in her flowing black dress, brightly coloured scarf and golden ear-rings. Many were familiar with the tanned, weather beaten face and small, frail figure for she lived by selling combs, clothes pegs, ribbons and laces from door to door. 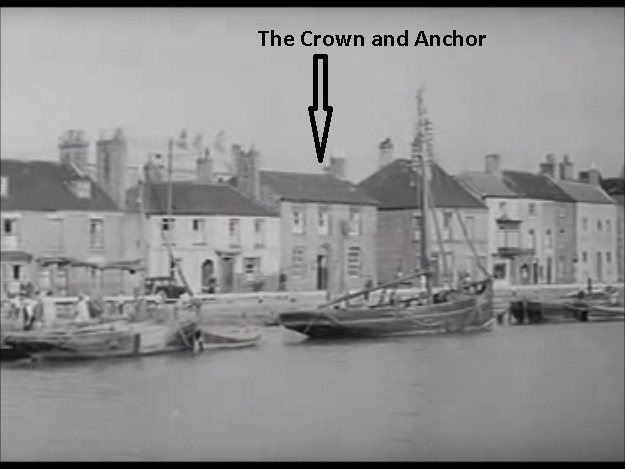 The Crown and Anchor (now demolished) in London Road.
But few knew of her private life. Even her immediate neighbours, Mrs. Holland and Mrs. Bagley who wrote her letters and did her washing knew little of her before she came to the yard. She had a fiercely independent nature that scorned the exchange of confidences.
Painted on the caravan in an ornate style was the word "Lowestoft," a single clue to her origin.
In previous years she had travelled to Skegness in the summer months and appeared as "Madame Eva," Palmist. With the end of the season she would return and take up life as if she had never been away, living quietly in the same obscurity that shrouded most of her past.
She had a strange, unpredictable nature. One day she would be dancing happily in the yard, applauded by the small children who regarded her with a mixture of awe and affection, the next she would shut herself up in the small caravan, speaking to no-one.
One fact that she did reveal to her friends was that she was the youngest, and last, of a family of 12. That, and a few faded photographs of her parents, was all the information she ever volunteered.
She had travelled all over the country and many were the wild and wonderful tales she could tell when the mood was on her.
Her age when she died in July 1949 was officially recorded as 95 but relatives believed her to be nearer 100. The few mourners at her funeral consisted of her neighbours Mrs. Holland, Mrs. Bagley and Mr. L. Bainbridge, proprietor of the Crown and Anchor and a small group of relatives who left as quietly as they came.
So ended the life of a woman who spent most of her life in the highways and by-ways of England, a woman of mystery, observing everything and speaking little. A woman who many Bostonians knew of - but never knew.
Posted by Billy at 8:44 pm