The First World War tank that once stood at the end of Bargate Green opposite the main Post Office was formally handed over to the town in August 1919. The tank drove through the town on its own power to the spot where it stood and thousands of people watched its uncanny and noisy journey through the streets. It was handed over by Captain Farrar, the tank Commander, because Boston and District had subscribed thousands of pounds to the various war loans. 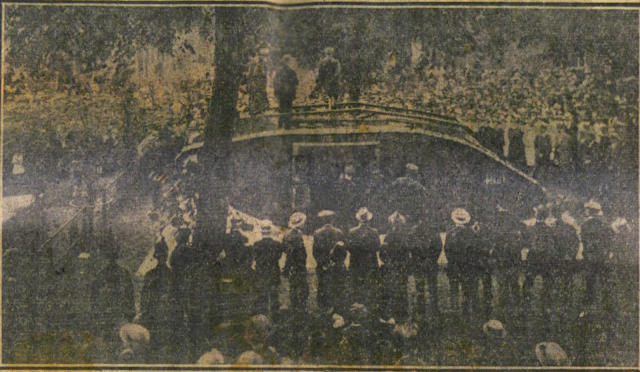 The gift to Boston in 1919.
In the course of his remarks Captain Farrar revealed that Boston's tank was a female!! There were two distinct types of tanks, he said. The male carrying two six pound Hotchkiss guns and the female carrying six Lewis guns and about 24,000 rounds of ammunition - and the female of the species was deadlier than the male! He went on to say that there had been a lot of criticism about the distribution of war-torn tanks as war relics, people said they did not wish to be reminded of the killing and ruthlessness of the greatest war the world had ever known, in the form of an old tank. He respected their view but wanted to point out the other side.
The tanks, he said, stood as an emblem of British ingenuity, British resourcefulness and British brains. The tank, some people thought, was made as a life taker. It was not. It was made primarily as a life saver. The Boston Corporation hoped that it would be a memorial, not only for the present generation, but for generations to come too, but in 1937 Thos. W. Ward, Ltd., of Sheffield, bought the tank and a German field gun from the council as scrap metal at the price of £56.

Search for "tank" to see Goodbye to the tank on a previous story.
Posted by Billy at 6:05 pm