In 1912, Tattershall Castle was in a sorry state and needed repairs. Two men residing in Boston at that time, though not Bostonians, succeeded in bringing off a coup whereby they were financially benefited and the restoration of the Castle was hastened. The bricks in the castle were of a size not manufactured in 1912 - they were what were known as two inch bricks - and consequently the architect, Mr Weir, who was supervising the restoration of the castle, had been hard put to obtain an adequate supply of properly dimensioned bricks. Naturally, the scheme of the restoration depended for its success upon the use of fitting and harmonious material, otherwise the effect would be marred by the incongruity of a mixture of the ancient and modern. The district had been scoured for buildings consisting of the bricks that were needed but there were very few remaining.
The two gentlemen previously spoken of, Mr H Sawyer, the manager of the Labour Exchange, and Mr A Bateman, Bridge Street, Boston, happened to hear about the matter, and also discovered that a couple of miles from Boston, at Wyberton, on the road leading from Wyberton Chain bridge to Frampton, was a very old house, in a ruinous condition, believed to be built of two inch bricks. 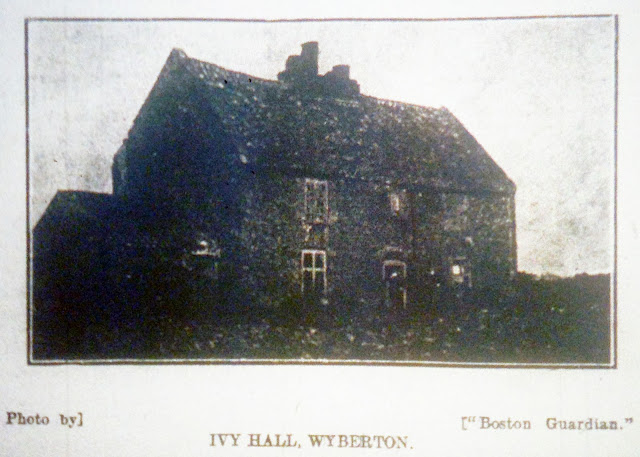 They immediately investigated the matter, and one of them cycled over to Mr Weir, at Tattershall, with a sample brick. Mr Weir was delighted, and promptly ordered several thousand bricks providing they all conformed to his requirements. He paid a visit to the house in company with Mr Sawyer and Mr Bateman, and was very enthusiastic in his admiration of the building. The house, he said, was a fine Elizabethan structure, and the bricks exactly similar to Tattershall Castle in size and composition, far transcending any he had previously seen. Mr Weir made a thorough examination of the premises, and was much taken with the massive hexagonal chimneys, of which there were three, and spoke very appreciatively of the whole building. Mr Weir had no hesitation in giving an order for 30,000 bricks forthwith. The price given was between £2 and £3 per thousand, and as the building was bought very cheaply Messrs. Sawyer and Bateman were assured of a good profit on their transaction.
The house was familiarly known as "Rat Hall," owing to one of its former inhabitants, named Smith, having followed the calling of a rat-catcher. The proper name of the house, according to an old inhabitant living nearby at that time was "Ivy Hall," on account of having at one time been covered with ivy. A tour of the premises revealed that it was indeed a venerable house, the ceilings being of the old-fashioned rush plaster, while the fireplaces were simply enormous. The great chimneys, which ran through the building, measured 11 feet x 10 feet, and the fireplaces were fully in keeping with the colossal chimneys. The fireplace in the kitchen was of the open hearth type originally, and measured about 12 feet across. In the kitchen, too, was a very ancient mangle estimated at that time to be at least 150 years old. The beams of the house where of oak, very massive, and were still in splendid condition, and right through the premises were indisputable evidences of great antiquity.
Mr W Greenfield, to whom had been awarded the contract for the demolition of the house, estimated that there were about 115,000 bricks utilised in the building, and it was stated that but for its discovery, Mr Weir would have been compelled to unearth the massive brick foundation of the Castle, for the purpose of using those bricks on the visible portions, and would have had to fill up the gaps with concrete.