In August 1920 Chas. Harlow, of Smith’s Court, Wormgate, Boston (reached by a passage at the side of 20, Wormgate) had an ejectment order granted against him by the local magistrates. Eleven years previously he is said to have vowed “I will never work again.” and that vow made at the age of about 35 altered the whole course of his life. He was then a fairly average citizen, with, it is said, at least £1000 to his name, and a wife and two children. In a family squabble the money went and since that time to 1920 he had lived apart from his wife and family and kept true his vow which brought him years of self imposed misery. The grounds of his ejectment from his two roomed tenement were filth and dilapidation. 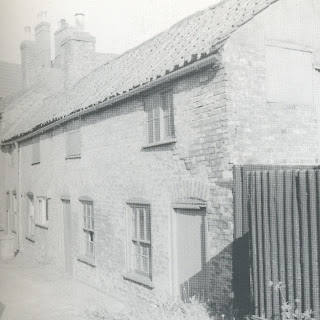 “Rasputin” was one of his nicknames probably from the fact of his dirty long hair which fell upon his shoulders with a beard to match. He didn’t use the upper room of his house and the “furniture” of the ground floor consisted of two boxes and some old potato sacks for a bed. The only ornamentation of his dwelling were twenty or so empty match-boxes on the mantelpiece.
The neighbours said that he retired to rest at about 5 p.m. and did not rise until about 10 a.m. when he made his appearance at the tap in the courtyard to get water for his meal of bread and cold water.
He often walked briskly around the town and was the object of much ridicule from the children of the town who called him “Crow’s Nest”. He was a pathetic figure, scantily attired in old greasy clothes in the coldest weather, and it was said he never had a fire. His hair and beard were never cut for he said it was against nature and that dogs, cats, beasts etc. never have their hair cut. Yet he was once a hairdresser!!
Posted by Billy at 8:54 pm