In the early hours of Monday 9th September 1906 a fire, which resulted in the death of a young girl, occurred at 27 Strait Bargate (the present site of WH Smith) the premises of the Bargate drug stores. The household consisted of the proprietor Mr Charles Fowler Cooke, his wife, their two daughters (Ellen Gertrude, aged 23 and Eva aged 19), and a servant girl Elizabeth Jessop. Mr and Mrs Cooke slept on the second floor, the two daughters occupied a bedroom at the top of the house and the servant also had a room on the same floor as the daughters.
The family went to bed at about 11 o clock on the Sunday night and everything was alright, shortly after midnight Mr and Mrs Cooke were woken up by a noise that sounded like tins falling and Mrs Cooke went to investigate. On going to the landing she saw through the glass panel of the warehouse door that a light was burning inside and rushed back to her husband and told him. She hurried to rouse the two daughters and the servant while Mr Cooke attempted unsuccessfully to put out the fire with a hand basin and a bucket of water. Mrs Cooke succeeded on waking the sleepers at the top of the house and they descended the stairs but when Mrs Cooke and Eva Cooke reached the street they discovered that Gertrude and the servant were missing. 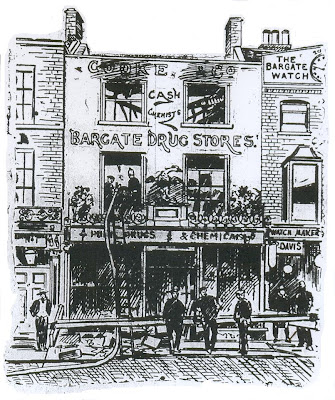 Meanwhile, someone had gone and told a police officer and he blew his whistle and raised the alarm. When he arrived at Cooke’s the place was ablaze and numerous helpers were on the scene. Mr Morgan from a local shop heard that the two females were trapped inside and got a ladder from the Red Lion hotel in the same street and attempted their rescue. There appeared to be a girl at each of the two top bedroom windows and from the one occupied by the daughter Gertrude came heartrending screams but unfortunately the ladder only reached as far as the balcony. Miss Jessop, the servant, let herself down onto the balcony a distance of about 10 feet and through the efforts of two bystanders she was saved.
All the incidents above happened within the space of about 10 minutes and then the hose cart and a longer ladder appeared on the scene. “Save my child!” the parents cried in anguish and Fireman Haynes and J A Wilson went up the larger ladder and thoroughly examined the two top bedrooms, looking under the beds and in every corner that the girl might have hidden herself to hide from the flames. The remaining members of the Volunteer Fire Brigade arrived and fortunately a plentiful supply of water was available and the brigade worked furiously to get the fire under control. Hundreds of people were attracted to the spot by the glare and every now and then as some new part caught fire the sparks ascended and descended like a sky rocket. Thousands of gallons of water were poured into the premises and the destruction of the whole block was prevented.
The general confusion was added to by the constant bursting of bottles and shattering of glass etc. in the shop and dispensing department. The roof, considering the flames were fiercest in the top story held up well and it was about 3am when it fell in with an awful crash. 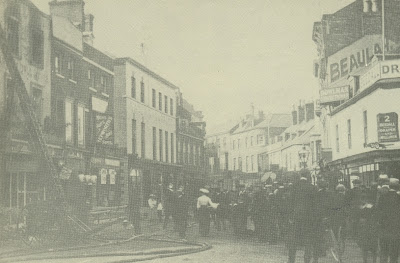 Above: The morning after the fire.
At about 7 a.m. in the morning the remains of the young lady, charred beyond recognition, were discovered on a burnt bed in the debris, having evidently fallen through when the roof gave way. It is thought that she left her mother and sister coming downstairs, returning with the purpose of saving the servant. Exit by means of the stairs was impossible and the servant realising this escaped from the window begging the deceased to follow. She was either too frightened to do so or was overcome by the smoke and sank back unconscious on the bed that her remains were found lying on, there to meet her fate.
The cause of the fire was attributed to mice gnawing matches and the remains of Miss Ellen Gertrude Cooke were buried in Boston cemetery on Thursday 12th September 1906.

Below: The scene today.﻿ 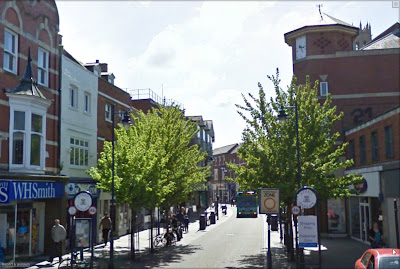