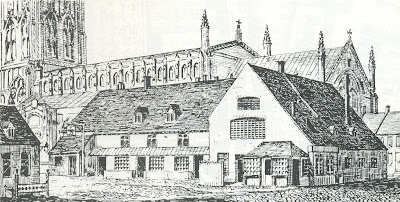 The old Gaol is on the right of this drawing.
In September 1898 a set of gibbet irons (below, left) and a headsman's block from Boston Gaol were sold at an auction room in Covent Garden, London. They were bought by a Mr. Williamson, he paid £4. 17s. 6d. for the gibbet and 7s. for the block which was described as " a rotting discoloured stump, gashed and scarred, and altogether unlovely".
This particular set of gibbet irons were erected down Ralphs Lane.
The story of the last man "hanged in chains" in the neighbourhood of Boston is as follows:-

A man named Ralph Smith had, for some reason or other, a grudge against an old man named Sutton, living in a cottage in a field near to Wyberton Church. One day, so the story goes, the old man was going home to his dinner, when, as he opened the door, Smith hit him on the head with an axe, killing the old man on the spot.
Smith was taken to Lincoln, tried, sentenced to death and hanged. The body was then taken to Wyberton to be "hanged in chains" as a warning to others. The news quickly spread that the body was on the gibbet and the place became very lively, especially on Sundays, when it was more like a Fair.
An old resident of Boston named Polly Searby, who died in the 1860s/70s used the bone of the first finger of Smith's right hand as a tobacco stopper!
When the gibbet was removed it was stored in Boston Gaol, and when that building was pulled down, the chains were on view at Mr. Ball's museum at The Whale pub (Main Ridge).
Posted by Billy at 8:27 pm