In 1913 the old Town bridge (below right) was pulled down and the present one was built. During the building work one of the labourers had been working on some very dirty material and wanting to wipe his hands picked up a piece of rag for that purpose. To his surprise a big copper coin rolled out.
Being unable to read or write the man put it in his pocket and went home to his tea. While away he showed the coin to another man who, after reading the inscription, offered him 5 shillings for it, the labourer promptly sold the coin. 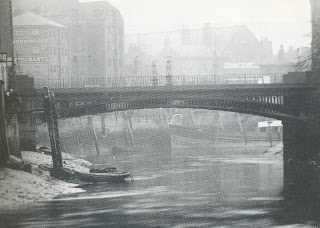 The resident engineer for the new bridge Mr. H.F. Richards heard of the story as the workman had invited his mates to drink his health with the 5 shillings and of course the reason leaked out as the beer flowed.
A clause in the contract stated that any relics found should be given up to the Corporation so Mr. Richards at once took steps to look into the matter and the original finder on being questioned alarmingly promised to get the coin back. The purchaser would not give the coin up even though he was offered slightly more than the original 5 shillings and, when told this Mr. Richards also tried to buy it back but to no avail.
The intervention of the Police was sought and P.C. Popple obtained the coin on payment of the 5 shillings and it was handed over to Mr. Richards.
The coin itself was a Twopenny piece of George III dated 1797, and weighing two ounces, which was placed in the stonework of the old bridge by its erector. Besides the normal inscriptions on the coin the head side had been imprinted with the words " W. Brand, Collr. Cus. P.B." and "8th April , 1806." On the tail side were the words "T. Wilson, of Sunderland, erected this bridge". Round the edge was the following "First block placed 5th April, 1806"
The "W. Brand etc" was W. Brand, Collector of Customs, Port of Boston, the T. Wilson was the erector, but Rennie, the engineer was not mentioned on it.
Posted by Billy at 11:26 am