The Bothamley family made clocks for at least four generations in and around Boston. 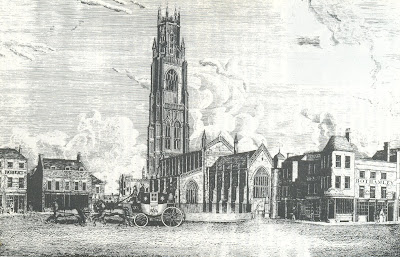 Above: Bothamleys shop on the extreme right.
Parkinson Bothamley.
Parkinson was married in 1771 to Elizabeth Wade, at which time he would have been twenty years old. He was first recorded as a clockmaker in the trade directory at Boston for 1791, after this we hear of him in1811 when he is established in the High Street. Parkinson was still listed as trading in 1823 (then aged seventy two), but by 1826 the business was already in the name of his son, Benjamin. Parkinson lived on till 1845, when he was ninety four years old. 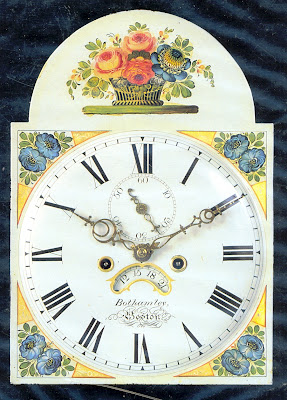 Above: a Bothamley clock face.
Benjamin Bothamley.
Benjamin Bothamley was born in 1799 and his name first seems to have headed the Boston business, now located in the Market Place, in 1826, when he would have been twenty seven years old. He was married twice and had ten children in all, amongst them a son born in 1832, Henry William, who was later to carry on the Boston business. Benjamin's name appears in the trades directories till 1856. He died in 1860. 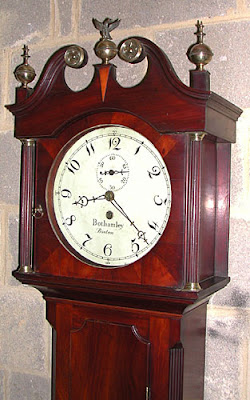 Above: a Bothamley wall clock.
Henry William Bothamley.
From 1861 Henry William ran the shop. His son, Alfred, who was born in 1860 remained a bachelor and the business closed with his death in 1929. 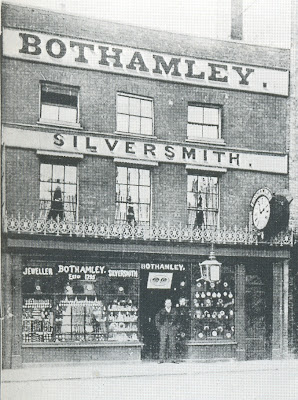 Above: Bothamleys shop in the Market Place, on the same site as the first picture.
Posted by Billy at 1:51 pm