On Sunday October 25th 1925, precisely as the clock was striking midnight, Mr. William Edward Newton, eighty years of age, of 7, Colley Street Boston, passed away. For a number of years he had suffered from gout and in his later years from total blindness but when he died he left a remarkable story.
He was born in Boston in 1845 and, after bearing what he considered the drudgery of school life until he had reached the age of 13, he decided to run away. He loved the sea, and at once decided to head for Liverpool, where he was successful in gaining a position with a Mr. Moss, a merchantman. Mr Newton was apprenticed to this merchantman, and he visited many parts of the world in his ships.
The spirit of adventure in this Bostonian could not be quenched, and on one visit to San Francisco he was enamoured with the sights of the town and decided to “give his ship a miss” and earn a living in America. He secured a position in some big lumber mills at Seattle, and he was employed there when the American Civil War broke out in 1861. The nationality of a man did not exempt him from fighting and it was not long before Mr. Newton was in the ranks of the American Navy. 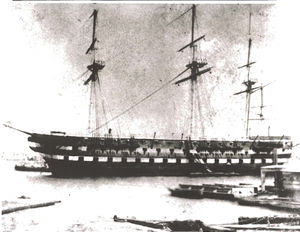 Above : The "North Carolina", one of the ships that Mr. Newton served on.
His knowledge of the sea stood him in good stead, and he very quickly worked his way up to the position of quartermaster. The ships he served on were the “North Carolina”, the “Vermont” and the “Corwin”, and whilst serving on one of these vessels he met another Bostonian a Mr. Hodgson.
Both returned to England and their native town, Boston, and both were somewhat surprised in 1910 to receive a notification from the U.S. President that they would receive a pension. Mr. Newton’s amounted to 12 dollars a month and Mr. Hodgson, as he had received a wound to his foot, got a larger amount. However when President Wilson was in control in 1915 this pension was, for some unknown reason stopped.
When Mr. Newton returned to Boston he continued his life as a sea-faring man, and for many years he was employed as a wire splicer with the Boston Deep Sea Fishing Company.
He had many friends in Boston and earned the nickname of “Cody” because he could relate all his American stories.
Posted by Billy at 2:40 pm