Wormgate is one of the oldest streets in the town. Its shape reflects its close association with the river, which was straightened in the early 19th century. 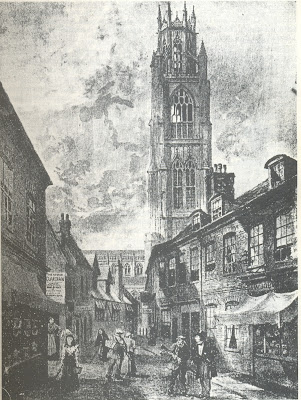 In the medieval period Wormgate was home to businesses run by many of the local, and not so local, monastic houses who exported their produce from their estates through the town. Fountain Lane, which connects Wormgate to Strait Bargate, was named after Fountains Abbey as the monastery owned a warehouse there.
During the 18th and early 19th centuries many grand houses were built with elaborate architectural detailing, also during this period many properties were established as schools, continuing a tradition begun in the medieval period when the Grammar school was situated in Wormgate and run by the town guilds. 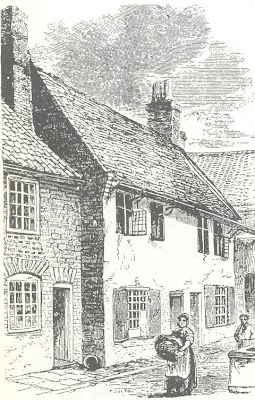 Above : The former Grammar School in Wormgate.
From the end of the 18th century Red Lion Street developed and was named after the Red Lion Inn that stood on Strait Bargate. Housing began to be built along the narrow alleys that ran off the streets and this reached its zenith in the late 19th century when numerous small dwellings were constructed in the gaps behind the terraces occupying the street frontages.
Wormgate has always been an important commercial area and many of the buildings were used as shops or warehouses throughout its history. Inns, taverns and pubs have also been a common feature; the Wormgate Inn can trace its origins back to the 16th century when it was known as the Dog and Duck and the Little Peacock Inn was originally a waggoner's inn, frequented by wagon drivers bringing in produce from the northern fens.
Excavations on the corner of Fountain Lane in 1989 (below) revealed medieval buildings that may have been owned by Fountains Abbey. 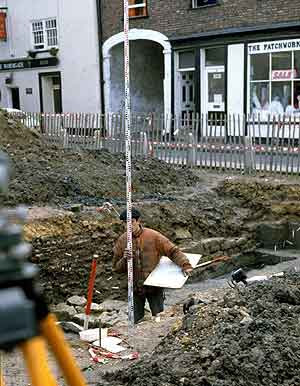