The head in the wall

In November 1951 the sudden appearance of a King’s head on the front of the newly constructed frontage of Stanwell’s Garage, near Vauxhall Bridge, in Main Ridge was causing a good deal of speculation.
It was reported at the time that “the head looks new but is of great antiquity and in a marvellous state of preservation and has the peculiarity of having eyes of marble, or some such substance, and strangely enough, the eyes are different in colour”. 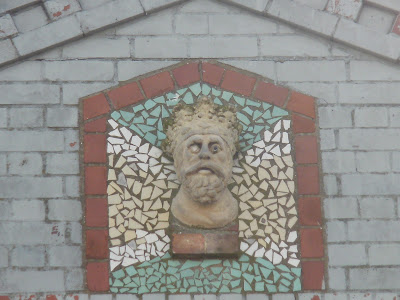 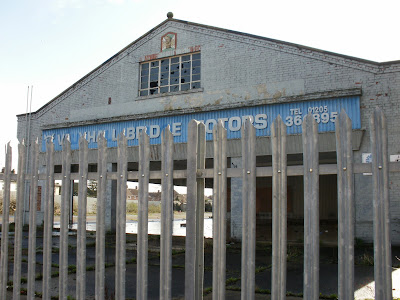 The builders who placed the head as a front piece to the building said they searched the pages of history books to try to find out who the King was and at last they found a picture of Edward I bearing the same expression, a similar beard and an identical crown.
Mr. G.A. Boyes, who lived near to the new premises said that originally the wide area around the new garage was a nursery carried on by him for 42 years, he also said that over 100 years previous to 1951 the rear of the land was occupied by a Mr. Gurner, who was a dyer. The kings head he said was fixed in the wall of one of the dye houses which were later transformed into greenhouses. Interest centred on the walls around the property too for Mr. Boyes said that they came from the Prison that once stood in the Market Place and it was assumed that the kings head came from the old Gaol as well.
Another story is that the head is from an old fairground ride.

Below: The garage and the row of houses next to it named "Sea on Land Terrace". 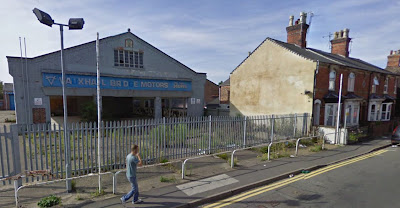 George Aspland of Boston had a ride called “Sea-on-Land” which consisted of eight fully rigged boats, which pitched and tossed about as they revolved and reputedly caused the patrons to suffer real sea sickness! From the profits from the Sea on Land he built a row of houses in Main Ridge in Boston (which happen to stand next to the old garage with the head) and what better name for them to be called than 'Sea on Land Terrace', his workshops were behind this row of houses so there could be some truth in this story.
Posted by Billy at 7:36 pm