In 1851 the exterior of the Stump (St. Botolph's Church) was much as it is today except, perhaps, that it had a rather neglected look. 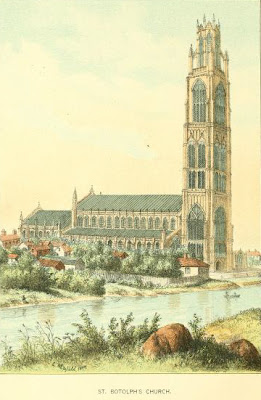 If you arrived on a week-day, you would find the church locked and would have to apply to Mr. Hackford, the verger, who lived nearby for the key. 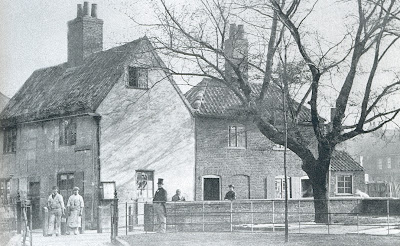 Mr. Hackford's house near the Stump.
The church-yard contained many upright tombstones, fewer trees, no hedges and no wall to separate it from the river and people were still being buried there.
The first thing to strike you as you entered would be the intense cold as in 1851 the church had not been heated since the day it was built. Bare arches opened into what is now the Cotton Chapel which was used as a vestry and there may have been an empty bookcase left behind by the Laughton School which was long housed there.
Under the tower there was nothing on the walls except the tablet about the fire in 1803. To picture the nave of the church as it was then you must mentally remove all the stained glass, the pictures on the walls, the coats of arms, the banners, everything in fact that now adds colour to the building. The nave was separated from the chancel by a mahogany screen and gallery which was later removed to the Roman Catholic Church on Horncastle Road.
On March 20th, 1851, Mr. Blenkin who had been vicar for less than two months held a meeting to consider re-pewing the church and out of this meeting developed the restoration and began the slow but continuing changes that leave us with the beautiful church that we know today.
Posted by Billy at 11:53 am