In 1951 an old green wooden structure in West Street that for a number of years had represented the Royal George, was pulled down. It had never looked Royal but it served its purpose until better days came along.
Its predecessor was a fine well-conceived inn, the destruction of which, with nearby property and the lives of those unfortunate people dwelling therein, made one of the grimmest of many evil nights when Boston was the target of the Luftwaffe.
West Street altered that night and we lost a part of Boston now forgotten and one never to exist again. Loveley’s Temperance Hotel on the corner of James Street was swept away and the Royal George, Mr. Lingard’s music shop, Mr. John Goodacre’s baker’s shop, and much other property in the neighbourhood was turned into so much rubble. So a great square of waste land was created, then came back Mr. Loveley’s temporary premises and the green wooden structure that was representative of the Royal George.
The Royal George that was bombed was one of the old-world inns, there was the popular old bar on the left of the door that faced West Street, and on the right the cosy old “snug”, the Landlord and Landlady were Mr. and Mrs. W. Dennis. The illumination was never very bright, but after shops had closed in the evenings dominoes, darts and all the other things you associate with a pub went on inside.
William looked after his house well, he was a smart little man, with mutton chop whiskers and his wife commanded such respect that never was anything said out of place. It was a hostelry of the old school with its wide open doors and ample stabling accommodation for Mr. Dennis’s horses and four wheeled cabs (called growlers) which would take people to the ball at the Assembly Rooms or the station to catch the early train to London.
So we come back to the 1950’s when it was decided to build some permanent buildings on the bombed site, a new Royal George included. It continued as The Royal George until well into the 1990’s and then changed its name to “Spatz” for a while.
Finally, it ceased to be a public house and is now an Indian Restaurant. 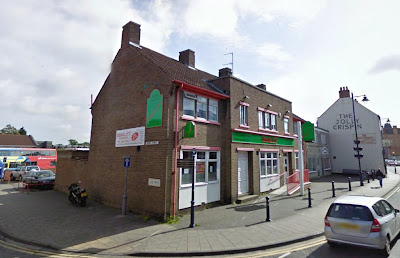 The site of the bombings and the new buildings erected in the 1950's.
Posted by Billy at 9:01 pm