The seed huts, or agricultural merchant’s huts, used to be wheeled into the town centre on market days. They had been a familiar sight for years and it was here that the merchant’s did their trading - but not everyone liked this link to Boston’s historic past. In August 1961 the residents of Sibsey Lane were angry and worried. Angry because they were woken up at half past four every Wednesday morning by clanking, squeaking and shouting as the huts were moved from their store yard at the bottom of the lane to the Market Place and worried because recently one of the huts had caused an accident where both the driver and an assistant from the butchers shop at the top of the lane had to be taken to hospital. 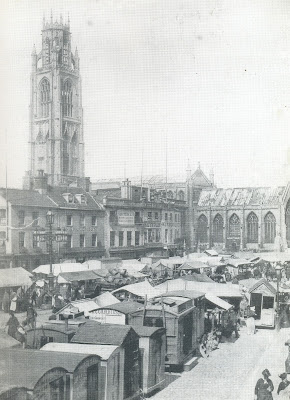 The Huts in the Market Place.
In 1961 it had only been fairly recently that the huts had been kept in Sibsey Lane, they used to be stored in the Peacock and Royal Hotel yard and once upon a time they were brought up to the market along Shodfriar’s Lane, which bothered no one, so people were asking why couldn’t Shodfriars Lane be used again instead of the narrower Sibsey Lane.

The Huts, the Still pub can be seen on the right.
Mr. A. Lawton, who had an office in Sibsey Lane described the noise when the huts are brought back from the market at about half past four in the afternoon as shocking and said “The row created by unoiled wheels and creaking shafts makes it impossible to speak on the telephone”.
Mr. and Mrs. Musson, who lived in cottages opposite said they were woken up soon after four‘o’clock every Wednesday morning by an unearthly row, and the whole house and everything in it begins to tremble - including their bed! There were about thirty huts they said and what with the noise of the horses, the driver shouting and the iron wheels - which sounded as though they had never been greased - the row goes on for about three hours.
Mr. S. Swift, who had a butchers shop at the top of the lane was furious about the way the huts were moved and said that one of them had recently smashed into the front of Shodfriars Hall and both the driver Jack Goddard and one of Mr. Swift’s assistants Robert Rogers had to be taken to hospital. 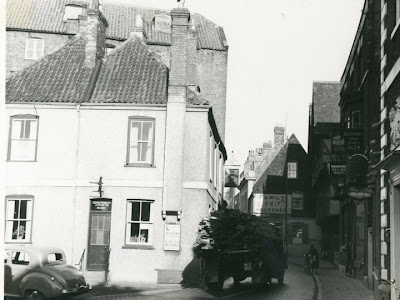 Mr. Swift's butcher's shop can be seen centre right, at the top of Sibsey Lane.
Mr. and Mrs. Locking, both in their eighties, lived at the bottom of the lane and got the worse of the noise, they both agreed that it would be better if they had rubber wheels instead of iron ones.
Mr. J. O’Hara, who had a betting shop in Sibsey Lane drew up a petition signed by 11 people and sent it to the Corporation but he was told that it was not their problem and should be sent to the Highways Committee.
What the outcome was and what happened to the huts I don’t know, I remember them in the Market Place well into the late sixties but, like so much of old Boston, one day you look and it’s not there any more.
Posted by Billy at 7:52 pm