The Stocks on Bargate green are a grim reminder of a punishment of times past, but have you ever wondered what kind of person was punished this way? Well, the last two people in Boston to be put in the stocks were "Barber Joe" and "Squealy Green". 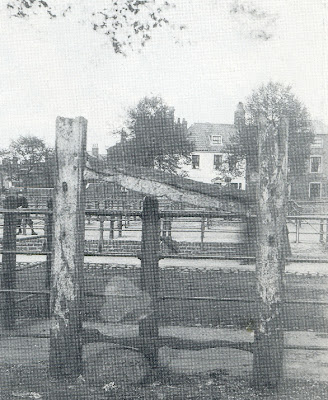 The old Stocks in Wide Bargate.
Squealy Green was a queer fellow, him and his wife used to bury the stray cats and dogs for the Corporation but he would then go with a rake and get them up again, and then  they had to be buried once more which meant double fees. Eventually the Corporation found him out and Green was marched to the stocks.
Barber Joe is believed to be the very last to go to the stocks, he used to go to the Angel Inn (below) and shave the countrymen in the Tap Room. He would take his shaving tin in his pocket and put it on the Tap Room fire to boil and when the water was hot set to business. 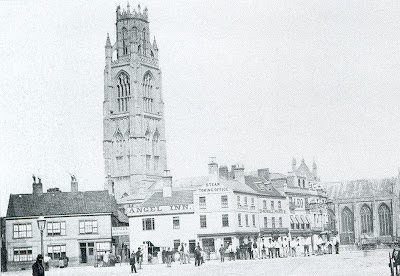 The Angel Inn, Market Place, Boston.
It was a regular barber's shop on a Saturday night. He did very well but was not satisfied and started shaving on a Sunday morning in his own house at the back of the White Hart, that made the other barbers jealous, and they laid a complaint, and Barber Joe was put in the stocks one Monday morning.
Jim Maline and Joe Ashton were the two constables who put him in the stocks and they had to stand by him all the time he was there. People kept throwing pennies and half-pennies which the constables picked up but Barber Joe raved and shouted and made them put the money on the post in readiness for himself later.
So there you have it, Squealy Green and Barber Joe, two of old Boston's historical people who deserve to be up there with Herbert Ingram, Jean Ingelow and the rest of them.
Posted by Billy at 5:57 pm