A paddock in Red Lion Street.

The Centenary Chapel  in Red Lion Street (below) was opened for service on October 1st, 1840 and was destroyed by fire in 1909. A new one was built in its place (second picture below) but what was there on the site previous to 1840?
Well, according to Mr. George Pearson, an old Bostonian, speaking in July, 1914 there was a large paddock there, bounded on each of its four sides by a high massive wall which had been built solely for the purpose of keeping out the general public. 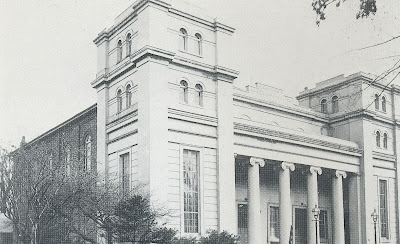 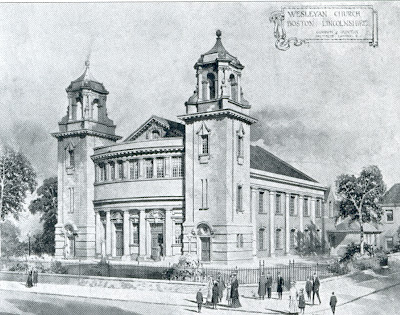 Access to the enclosure﻿, which, as part of the property of the Red Lion Hotel was popularly known as the Red Lion paddock, was only gained by one small gate set into the wall on the side flanking Red Lion Square but, in mockery of these precautions (the young of the town especially) scaled the walls or picked the lock of the gate and took part in organised games and sports. Mr. Pearson himself confessed to going in the paddock and said on Saturday afternoons it was crowded. The ground was also sometimes occupied by a touring dramatic company, which presented plays to all who might turn up, the paddock thus serving as an open air theatre. The "Strolling players", as they styled themselves, came at any time of the year and were as irregular in their visits as another travelling group who gave exhibitions of daring horsemanship in a temporarily erected booth.
Posted by Billy at 7:38 pm