William Wedd Tuxford was a miller and baker. He designed and produced a reeing (corn screening) machine, which led him into engineering. It is said that the engineering business started in 1826, but it is most likely to have been somewhat later than that (the patent for the reeing machine is dated 1830).
From these beginnings a fairly large business grew based at the Boston and Skirbeck Ironworks alongside Tuxford's windmill (the milling and baking business was continued by the Tuxfords).

Tuxford's, with Mount Bridge in the foreground and Skirbeck Church in the distance. 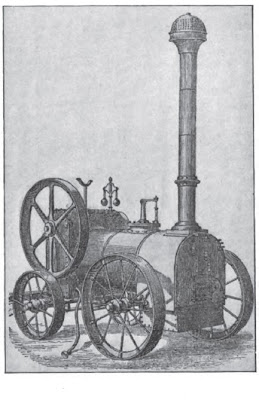 Above: A steeple engine of 1850.
Tuxfords were among the pioneers in the development of agricultural steam engines. Weston Tuxford (W. W.'s son) was probably influential in this. Their first portable engine was made in 1842, and they made a traction engine in 1857, following that with an improved design in 1861.

Above: One of Tuxford's traction engines. Below: Tuxford's exhibiting a portable steam engine at the Royal Agricultural Show at Newcastle in 1864. 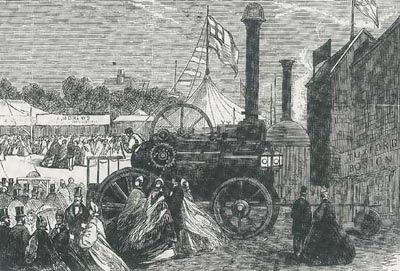 The firm employed about 300 at its height, but faced difficulties as agricultural depression from the 1870s onwards reduced demand from British farmers. When Weston Tuxford, sole surviving partner, died in 1885 the business was closed. Much of the ironworks was taken over by a new firm, Collitt & Co., who seem to have continued making some of the Tuxford products. But that only lasted until 1891. The eight sails from Tuxford's mill were later taken and put on the mill at Heckington (a village between Boston and Sleaford) where they can still be seen today.

Below: Heckington mill, where Tuxford's sails ended up. 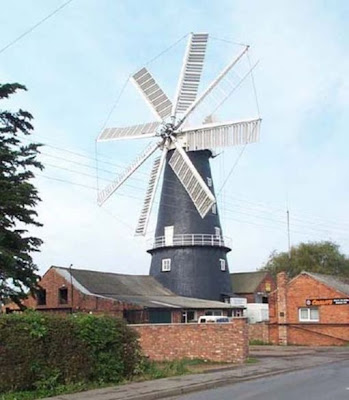