The Royal Coat of Arms.

Commercial House at 17 Market Place was once run by J.W. Loveley, even today if you glance up you can still make out the name on the side wall.
The strange thing about the building is that it once had the Royal Coat of Arms on it. 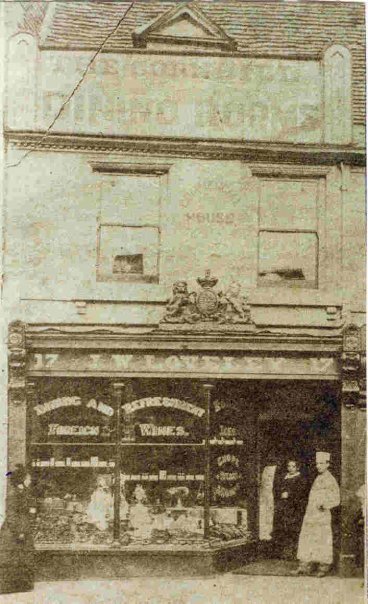 
Mr. John Loveley, speaking in July 1993 said that his Great Grandfather had a bakers shop in Dolphin Lane for many years. In the 1870's he purchased the shop in the Market Place from a jeweller who was giving up business, and that some years before, one of Queen Victoria's daughters, whilst visiting Sandringham, rode over to Boston and in fact purchased some jewellery from him and in consequence he was entitled to use the Royal Coat of Arms. These arms were put on the jewellers shop and were still on the shop when Mr. Loveley purchased it and it remained there for many years. Later a son of Queen Victoria stayed one night at the Peacock Hotel, so this became able to use the title "Royal" and the Peacock became the Peacock and Royal. The Arms on Loveley's shop were sold to the Peacock and  as shown in the picture stood over the main door. Maybe someone can tell us where they went from there.

The Royal Coat of Arms, just visible, above the Hotel door.
Posted by Billy at 10:26 pm