Arthur Lucan, was born Arthur Towle, the third of seven children, on 16th September 1885 in Sibsey, a village 5 miles from Boston. He moved to Boston with his family when he was five years old and attended school in Boston.

Arthur, second from left back row, when he was at Boston National School in Pump Square, Boston.

It was at Shodfriars Hall, which housed a theatre, within sight of his home, where the young Arthur Towle first trod the boards. Initially, his job involved sweeping the stage and selling programs. 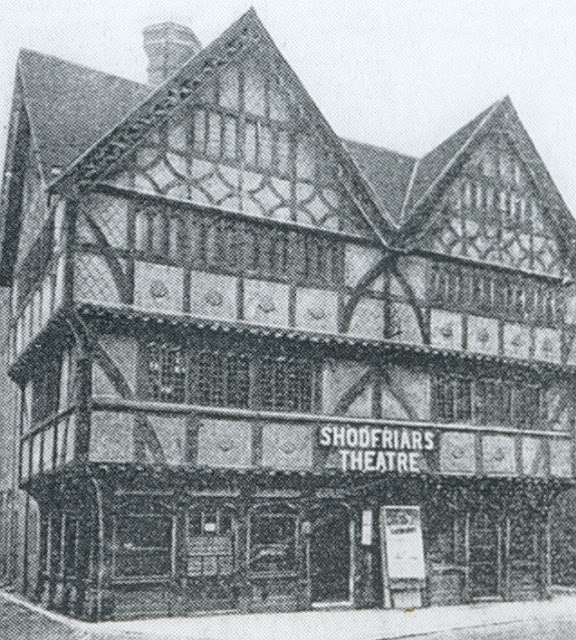 However, a serious epidemic of measles resulted in the young Arthur being asked to play a minor part. In 1899 he eventually managed to secure an onstage roll at the nearby Corn Exchange in the Market Place. 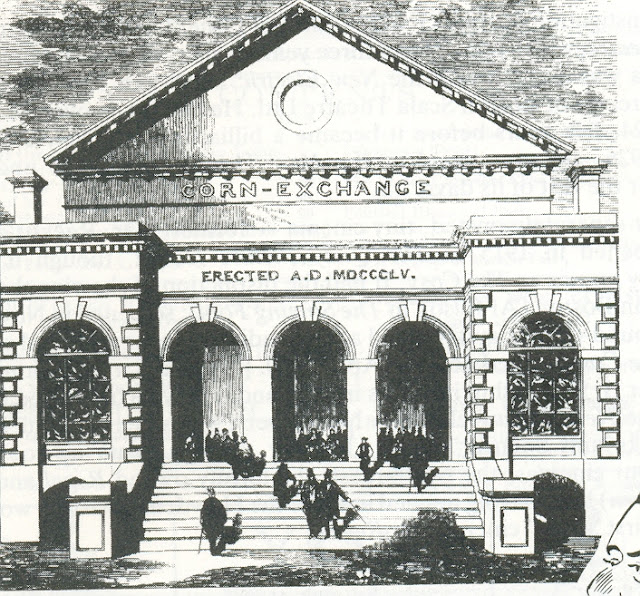 Above: The Corn Exchange, Boston.

Below: The Corn Exchange was situated at the rear of the buildings in the Market Place and was reached by an archway (see below) which still exists today at the side of the present (2012) site of Marks and Spencers.


After seeing a Pierrot show in nearby Skegness around 1901, the restless young Arthur joined a traveling troupe, "The Musical Cliftons." His formative years were spent learning his craft around England and Ireland. Whilst he enjoyed his time with them he yearned for the warmth and comfort of the static theatre. To this end, in 1910 he managed to secure a pantomime – Little Red Riding Hood – at the Queen’s Theatre, Dublin, by literally writing the script overnight, with himself playing the role of Granny. The title role in the pantomime had been given to a beautiful thirteen year old raven haired brown eyed local girl, Catherine "Kitty" McShane.

The couple fell in love, and against Kitty’s parents wishes, they were married in Dublin in 1913. Arthur was twenty eight and Kitty, only sixteen. Around this time, Arthur Towle changed his stage name to ‘Arthur Lucan’, after spotting a Dublin horse-drawn milk float with the words "LUCAN DAIRIES" on the side. ‘Lucan and McShane’ went on to develop one of most popular British musical hall, radio and film comedy double acts of all time – "Old Mother Riley and her daughter Kitty", forging a show business career spanning over forty years. 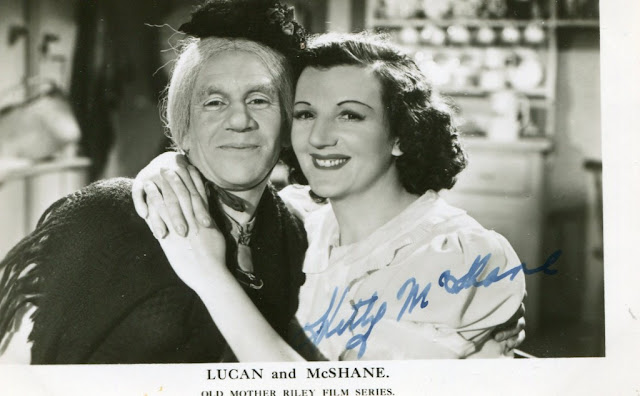 After their marriage, the couple honed their act, playing down the bill in numerous variety theatres across Britain. Arthur wrote the material and Kitty performed the musical numbers. The gangly Old Mother Riley dame character was usually a charwoman or laundress. With the aid of her headstrong daughter, Kitty, the comedy came from Mother Riley’s absurd predicaments, eccentric ways, facial and bodily contortions, and malapropism-filled tirades against all who displeased her, seasoned with "knockabout" slapstick. The character was extremely popular with children.

In the early 1920s Lucan & McShane’s hard work paid off, and in 1923 they undertook a successful overseas tour playing in South Africa, New Zealand and Australia. For the next ten years they continued to play the variety halls, now topping the bill. In 1934 an appearance on the Royal Command Performance established their popularity and celebrity status and in 1936, the couple’s famous sketch "Bridget’s Night Out’ was filmed for ‘Stars On Parade’ – a compilation film of British music hall acts of the time, including Gracie Fields and George Formby.

After appearing in minor roles in the film ‘ Kathleen Mavoureen’ (1937), a musical tale set in Ireland, the couple was approached to star in their own film, ‘Old Mother Riley’ (1937). The film, which was cheaply made (it cost £2,000, and took six weeks to shoot) was based around their famous music hall sketch ‘The Matchseller’. The film was a box office success and another quickly followed, ‘Old Mother Riley in Paris’ (1938). This film was based on another sketch; ‘The Stepwasher’ and it repeated the box office success of the first film. Another thirteen ‘Old Mother Riley’ films were to follow between 1939 and 1952. The couple also found time to tour South Africa in pantomime, make numerous radio appearances for the BBC and also record a number of discs for Columbia. They also featured in their own comic strip.

The last film in the ‘Old Mother Riley’ series, ‘Old Mother Riley Meets the Vampire’(1952) is perhaps the most well know, mainly for the bizarre casting of Bela Lugosi in an attempt to appeal to the American market. Whilst the ‘Old Mother Riley’ films were hugely popular in Britain, the Americans found the dame character and British humour not to their taste and this film was no exception. The film was made without Kitty, her part being played by Dora Bryan. The Lucian’s marriage had disintegrated due to Kitty’s infidelity and Arthur’s increasing drink problem. At the time of filming Arthur had serious money problems and was eventually forced into bankruptcy by Kitty’s profligate spending. Lugosi, who had been touring the UK in the play ‘ Dracula’, needed the money (he was paid US$5,000 plus living expenses for four weeks work on the film) in order to return back to the USA.

In the film Lugosi plays a mad scientist (Von Housen) – not a vampire – who is trying to take over the world with army of robots. After a series of comic misadventures Mother Riley saves the day. The film also featured well known British actors Richard Wattis, Graham Moffat, Hattie Jacques, Dandy Nichols and Charles Lloyd Pack, grandfather of ‘Wish You Were Here’ actress Emily Lloyd, and father of Roger Lloyd Pack who played ‘Trigger’ in the TV comedy ‘Only Fools And Horses’. Because the film was considered "too British", the American distributors had planned to edit out all of the footage featuring Arthur Lucan and re-shoot more scenes featuring Lugosi. However, by this time Lugosi was very ill and gaunt looking, so the idea was abandoned. The film was released under various titles in the States, the most well known one being ‘My Son The Vampire’, which featured some re-shot scenes and an introductory song by comedy singer Allan "Camp Granada" Sherman. Despite these changes, the film still remained a commercial failure across the Atlantic.

Arthur continued to make stage appearances across the country to pay off his creditors, chiefly the Inland Revenue. He collapsed and died in the wings of the Tivoli Theatre in Kingston-upon-Hull on 17th May 1954, whilst waiting for his cue to go on stage. In true music hall tradition of "the show must go on", the performance went ahead with an understudy playing the lead part. The audience was totally unaware of developments backstage, and only learned the tragic news after the performance.

Kitty McShane outlived her husband by nearly ten years. She died alone in her Mayfair flat in March 1964.
Posted by Billy at 4:21 pm