The West Street of today (2012) is mainly a mixture of Turkish, Polish, Indian, Chinese and other foreign shops so let's return to a better time when it was a beautiful part of our quaint old town and all the businesses were English, and in a lot of cases owned by local people. The photographs are all of West Street in different years.

First of all the year 1956.
One of Boston's favourite hairdressing salons, "The Cameo" was situated in West Street which also provided manicures, face massage and sold various cosmetics. Stan Cooper had a shop that specialised in the sale of motorcycles, new and second hand and also did repairs and spares, he was also an agent for James pedal cycles. Scotney's sold jewellery and did watch and clock repairs.


One of the grandest shops was Day's, founded in 1884 by Charles Day and was being run in 1956 by his sons Charles and Fred Day. Mr. Charles Day junior's opinion in 1956 was that West Street had "changed a great deal in the past few years". I wonder what his thoughts would be now !


Howes and Davies, a men's outfitting shop, prided themselves on their personal touch and L. F. Vere's "Select Cafe" was popular in the town, not only for a cup of tea but for their wedding and birthday cakes as well.

This building was pulled down and the Regal Cinema built on the site.

H.M.Hames shop supplied all baby requisites and had done so since it was established fifty or sixty years before, in 1956 it was owned by Mrs. D. Parvin whose Father founded it. 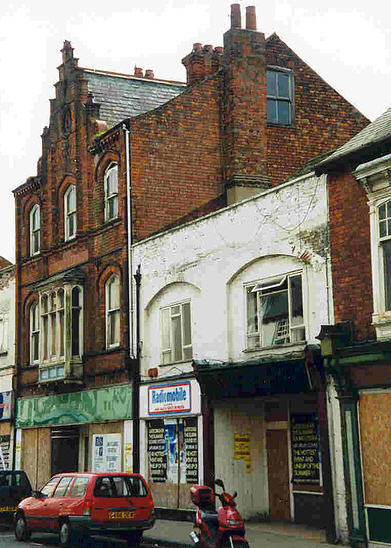 No matter what you wanted in the way of office equipment Eastern Counties were able to supply it from "typewriters, duplicators, dictaphones and adding machines to every type of printing and stationery" and in 1956 the firm celebrated its tenth anniversary, it was founded by Mr F.J. Taylor in the front room of his home in Eastwood Road, Boston.

Best's furniture shop, The Eagle pub is on the extreme right.

The Pop Shop, well patronised by the younger generation, commercial travellers and lorry drivers alike for "a nice cuppa" was very popular. For many years before the building was used as a pawnbroker's shop and in 1956 the Pop Shop had been there for seven years.
Ron Diggins had his Radio, TV and electric supplies shop in West Street in 1956 and was equally well known in Boston for his "Diggola" with which he provided music for many local functions.


Here I will give a few of my own memories of  West Street buildings and businesses that have disappeared in my lifetime.
Scotneys Garage was where P.C.World is now and next to it (on the corner of Trinity Street) was a little model shop with a huge tree outside of it. The Royal George pub, the friendly little Post Office (run by Mr. Kirton I think), The Regal Cinema, The Wimpy Bar, Cheers clothes shop,


The Police Station at the side of the Municipal Buildings, Cheshire's furniture shop, Pop shop, Arnold Green's, Dr. Usmar and Dr. Kaleba's surgery, Parkinson's, Boston Guardian building, Don White's cycle shop and the Labour Exchange.
Posted by Billy at 12:00 am