In April 1959 a section of floor was due for renewal at the Holland County Taxation Department offices at Allan House, Carlton Road, Boston, and when the old boards were removed the workmen discovered a whole hoard of bottles. There was a lemonade bottle of the old glass alley type with a windmill embossed on its side, and the name T.T.Houghton, Billingborough. There was also quite a selection of beer bottles, bearing such names as J. O'Hara, Cross Keys, Boston, Swinn's of High Street, and the Hundleby Brewery Company. Finally, there was a smaller earthenware bottle, which probably contained gin at one time. 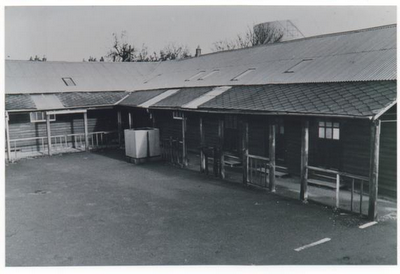 The old Taxation Department huts that at one time stood next to Allan House on Carlton Road.
For one moment there were thoughts of secret drinking parties by some of the High School girls who at one time occupied these huts but Deputy County Taxation Officer Mr. W.R. Smith had a more probable - and less sensational - explanation to offer. These buildings, he pointed out, were originally Army huts at Brocklesby Park, and were brought to Boston just after the First World War, and erected on brick foundations on that site. He thought that probably some of the workmen, after quenching their thirsts, got rid of their bottles by simply throwing them down in the foundations, where they had remained unsuspected ever since.
Posted by Billy at 10:09 pm