There have been many locally owned chemist shops in Boston over the years, Hursts, Grimble and Kent, Frank Thomas's (who had a shop on the site of the Scala Theatre), Bailey and Alexander's, Mr. Davy in Wormgate and West Street, and Pearson's in Red Lion Street to name a few but I came across a story of one of  them recently who I believe should be remembered by Bostonians.


Grimble and Kent's, on the corner of Bridge St. and High St.
His name was Mr. Pishy Snaith and he occupied a shop in Main Ridge. I dont know the year of the story but it was before 1930 as Mr. Snaith had died by that year. He had a wonderful statuette of a racehorse in his shop window and he sold a remarkable scent, the perfume of which was supposed to be a cure for spinsterhood and bore the attractive title of "Husband catcher." 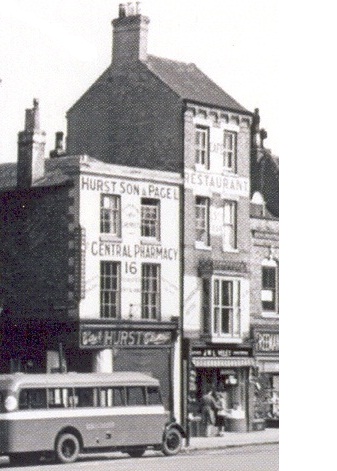 Hurst's chemist in the Market Place, on the corner of Dolphin Lane.
Anyway, the old gentleman was sadly teased by the youths of the day who delighted in causing him annoyance and one day they decided to collect as many rats as they could and put them in a sack, they also rounded up all the local stray cats they could find and these were also placed in a sack. One of the group called at the shop, closed the door, and when asked what he wanted, remarked : "I hear you want some rats, Mr. Snaith," and emptied 10 or 12 of them on the shop floor. In the midst of all the chaos a second youth arrived, "I hear you've got rats in the shop, Mr. Snaith, and you need some cats," and accordingly he emptied his bag of yowling spitting felines. What the climax of the story was is not told but Mr. Snaith (and his tormentors) are another example of the Bostonian character of old.
Posted by Billy at 11:14 pm