George Bass was born on 30 January 1771 at Aswarby, a hamlet about 20 miles from Boston. His father died in 1777 when Bass was 6 and he and his Mother moved to Boston. He attended Boston Grammar School and later trained in medicine at the hospital at Boston. At the age of 18 he was accepted in London as a member of the Company of Surgeons, and in 1794 he joined the Royal Navy as a surgeon. 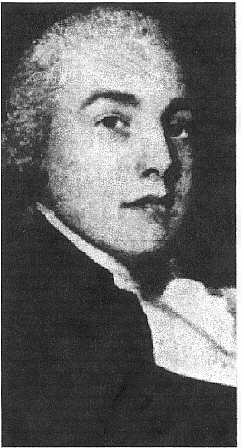 George Bass.
He arrived in Sydney on HMS Reliance on 7 September 1795. Also on the voyage was Matthew Flinders. Together with Flinders, he sailed more than 18 000 kilometres exploring the coastline of Australia and proved that Tasmania was an island. Soon after they arrived in Australia, Bass and Flinders explored the coastline south of Sydney in a tiny boat called the Tom Thumb. Bass who was 24, and Flinders who was only 21 were both very adventurous. Very few people would have had the courage to sail into the open sea in such a small boat. During this trip they explored the land south of Sydney and found land suitable for settlement.


Memorial in St. Botolphs church (The Stump).
In 1797 Bass left Sydney in a whaleboat. He took with him 6 sailors and 6 weeks' supply of food. Before reaching Western Port, he came across a party of 7 escaped convicts and promised to rescue them on his return. He then sailed on to Western Port on the southern coast of Australia. Strong winds forced him to stay here for nearly 2 weeks. Bass suspected that there must be a strait of water separating the mainland from Tasmania (then called Van Diemen's land). He rescued the convicts on his way back and sailed back to Port Jackson, after exploring 300 miles of previously unknown coastline. In 1798, Bass and Flinders set off in the Norfolk to sail around Van Diemen's Land. The Norfolk was the first boat to be built in the colony and was built by the prisoners on Norfolk Island. Bass and Flinders discovered and explored the Tamar River. They then spent another 3 weeks mapping the north coast of Tasmania before they sailed down the west coast. They sailed down the Derwent River where Hobart now stands and then set sail for Sydney. They had proved that Van Diemen's Land was an island by sailing right round it. Flinders named the strait, Bass Strait, after George Bass. The discovery of this strait meant that ships could save days when sailing to England, by sailing straight along the south coast, rather than right around the bottom of Tasmania. This was their last voyage together. Bass sailed from Sydney in 1803 to travel to South America. He disappeared and was never heard of again.

Bass lived for a time at the Crown and Anchor in London Road Boston, the pub is now demolished but this sign was saved and embedded in the wall at the site.
Posted by Billy at 5:41 pm