One of the biggest employers in Boston at one time were the local woodyards. As teenagers in the 1960's we used to go down the river bank near Skirbeck Church and on the dock to climb the hundreds of wood stacks situated there, the dock was owned by the council in those days and you could walk on and off at will. Here is a very brief history of some of the Boston firms.

W.H. Lewin.
Sometime in the first half of the 19th. century the firm of W.H. Lewin, timber and hop merchants (a strange combination) came into being. In 1859 Mr. Frank Harrison entered the firm which was known as W.H. Lewin and Son, and a few years later he became a partner the name being changed to Lewin, Son and Harrison. It was in the 1880's that Mr. Harrison took over the firm, and changed its name to the familiar (to my generation) Harrison and Lewin.
In 1917 when Mr. James Tait became manager of the firm they had two yards in South End and by 1939 they employed 120 - 200 men, had six yards and storage room on the dock, the whole covering about ten acres.

J.S. Towell.
In 1917 J.S. Towell came into being when  Councillor J.S. Towell took over a yard at Bargate End. It was a very small business to start with but before his death in the late 1930's he had seen it grow until it gave regular employment to 120 men and up to 200 in the importing season. In addition to the original premises the firm also had yards in Skirbeck Road as well as all round the dock. 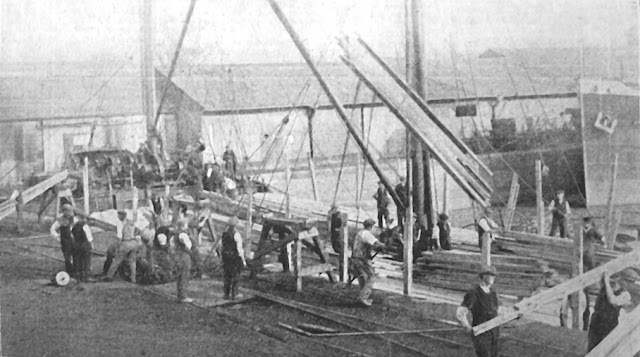 Above: A timber boat being unloaded at Boston Dock in 1926.
E.S. Trenery.
Just after the First World War E.T. Trenery and Sons, of Northampton, began to import timber through Boston and in 1925, Mr. E.S. Trenery dissolved partnership with his co-directors and commenced business in Boston on his own account. Two years later the limited company of E.S. Trenery and Sons was formed. Again, by the late 1930's they employed about 36 men (rising to 60 in the importing season) and had about two acres of storage ground.

May and Hassell.
A Bristol firm, started in 1885, May and Hassell opened their Boston branch in 1928 and ten years later the Boston branch handled more timber than any of its other branches. Their storage ground in Boston covered about ten acres and they had a regular staff of 50 men increasing to 120 during the summer.

Calders.
All the above firms handled general timber but the timber trade did not stop there for there was also the telegraph pole industry as represented by Calders. After the coming of the railways to Boston a Mr. Calder started a sleeper mill on the dock for the cutting of sleepers for the tracks. In 1930, Sir James Calder, who was head of the firm, decided to extend the work to the handling and creosoting of poles, and a site on London Road was purchased, sidings were laid down, and the creosoting plant installed.
The growth of the business was extremely rapid and in 1934, the peak year, 45,000 telegraph and power line poles were sent to all parts of the country. As can be seen below Calders (now Calders and Grandidge) is still going strong in 2012.