Boston's deep sea trawler fleet suffered a terrible toll during World War One. No less than 16 steam trawlers were sunk, at least 51 trawlermen lost their lives and 53 more were held as prisoners of war.
Ten of the 16 trawlers concerned were lost in August 1914, the first month of the war, nine of these belonging to the Boston Deep Sea Fishing Company. The Admiralty had ordered no more sailings, and the recall of those trawlers at sea - which was no easy matter in view of the scarcity of radio communications.
In a night sweep of the North Sea fishing grounds, carried out by the German Navy before the Admiralty instructions could be implemented, 15 trawlers were sunk, including the 10 from Boston. Their 73 crew members were all taken prisoner.
The Boston Deep Sea Fishing Company suspended all activities the following month, 80 fishermen being laid off work. Fishing was resumed in 1915, and that June the "Arctic", owned by the Stringer Steam Fishing Company, became the first of a new crop of casualties. Four of her crew were killed when she was shelled and sunk by a German submarine 75 miles off Spurn Head, the other five crew members were picked up by another trawler the following day after taking off from their stricken ship in a rowing boat.
Lost without trace between November 1915 and the following April were the "Fijian" (also owned by the Stringers) and two Deep Sea Fisheries trawlers, the "Holland" and the "Carrington" and their 26 crew members. 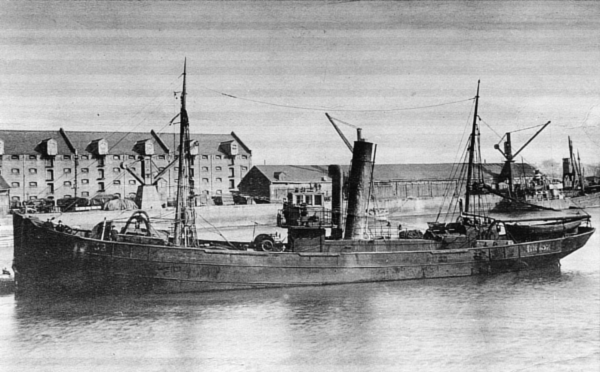 The Holland, lost without trace.
Another Stringer boat had a remarkable escape, the "Cetus" was abandoned when she came under shellfire from a submarine, but was towed into Aberdeen by another Boston trawler - and her crew was picked up after 23 hours in an open boat.
The "Dalmation" and the "Brothertoft" were the final casualties, lost in the spring of 1917.
Coincidentally, later in the war, Boston was chosen to be the port for the exchange of prisoners. My Grandfather who lived in London was involved in this task and got a liking for Boston during his time here and in 1919 moved, along with my Grandmother and their 9 children (including my Father)from London to make their home in Boston.
Posted by Billy at 2:45 pm