Bargains at the Regal.

In its golden era it was Boston's music-hall mecca. In the fifties, the age of the cinema, a seat in the one-and-nines for a Doris Day / Cary Grant movie, with a choc ice in the interval, was the highlight of the week for scores of local teenagers. In the 1970's it was the white elephant nobody wanted, and finally in July 1981, just five years after it closed its doors to cinemagoers, the Regal opened them again and some of its contents were sold off under the auctioneer's hammer.
Time had taken its toll, and inevitably, as the once proud and fashionable theatre had stood empty, decay had set in. The air was musty, the red plush seats had gathered dust, wallpaper in the foyer hung in sad loops from the wall, and windows that the vandals had left unbroken in the big swing doors were covered in graffiti written in the dirt that had gathered over five years.
About two hundred people went along, and there were some bargains too, if you happened to be in need of a five year old virtually unused generator, a mahogany grand piano, a 34 foot long portable cinema screen or a six way automatic ticket machine. 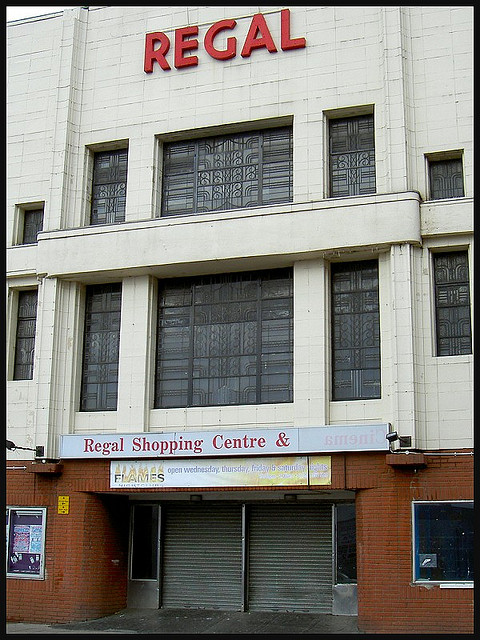 The Regal, after its closure as a cinema, became a small shopping centre on the ground floor and "Flames" nightclub in the upper part.
And for collectors of memorabilia wanting a permanent reminder of the Regal's  glittering heyday there were plenty of nostalgic souvenirs going cheaply.
A collection of old posters from the fifties and sixties leaned against the stucco wall in the stalls, a reminder of the bright, innocent shows and films that used to bring the customers flocking in. Ranged around were old posters for Mother Goose and Babes in the Wood, and for Millican and Nesbit.
On the stage amid a great sea of cable and rusty clutter were ancient mirrors, a plywood model commissionaire directing patrons to there seat numbers and nearby a genuine commissionaire's uniform and braided peaked cap, the wine coloured jacket mildewed and cobwebby.
Upstairs in the lounge, where, bargain hunters were told, the two large sofas were not for sale, there was more for souvenir hunters.
It was a sad afternoon for the Boston Scala Theatre Company, and for the Howden's, who had been involved locally in the theatre and show business for many years.
Mr. George Howden, brother of the Regal's managing director Mr. Ralph Howden, was there watching as its heart and soul were knocked down to the highest bidder. He began his theatrical career at the New Theatre in the Market Place in 1926, and at one time worked as a call-boy backstage at the Regal.
Brother Ralph, a familiar figure at the Regal for 40 years, was nowhere to be seen. "I think he prefers to keep away. He's had enough," said George.
Mr. Dudley Bryant, of Eley's, who conducted the sale said, "It was very successful. There was a lot of interest shown, both locally and from much further afield, and we had buyers who were theatre and museum owners from places like Humberside, Northamptonshire, Shropshire, Norfolk and Warwickshire."
After this the Regal struggled on in various forms, a ground floor shopping centre, a smaller cinema and as a nightclub. It was finally demolished in about 2005 and gave Boston yet another beautiful car park. (sarcasm). 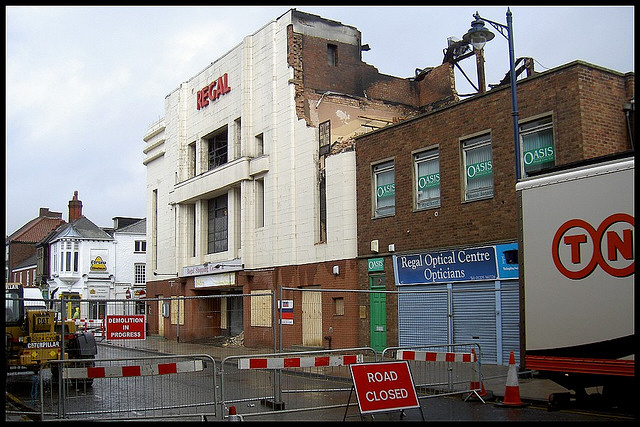