Carriers formed a vital link between scattered communities prior to the coming of the railways in the late nineteenth century and even later in isolated rural communities, providing transport for goods and people between the various locations. They continued to trundle into Boston on market days - albeit in gradually diminishing numbers - throughout most of the 1920's and as late as 1932. They were to be found (amongst other places) parked for the day in that part of West Street near the end of Emery Lane, the old White Horse Hotel was in that area and some owners parked in the Hotel yard. 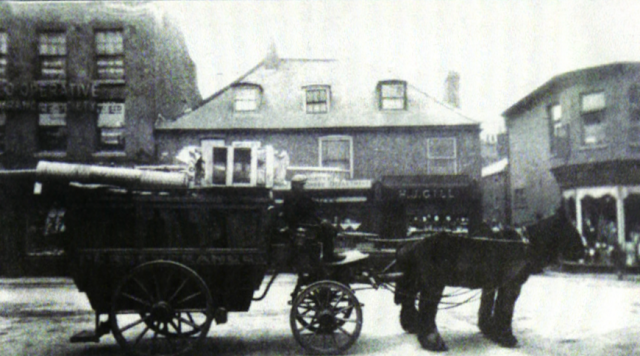 This picture, taken in West Street, Boston in February 1932, shows the Perseverance which was one of the horsedrawn carrier carts in Boston. The owner, Lawrence Richardson, is sat on it driving the horses Betsy and Daisy.
These carts, as E.P. Jenkinson remembered them were smallish (perhaps 10 ft. by 7 ft.)  horsedrawn, four wheeled, flat bottomed canvas canopied vehicles designed chiefly for the carriage of parcels and other packages, but which had a wooden form along each side to accommodate some seven or eight passengers. 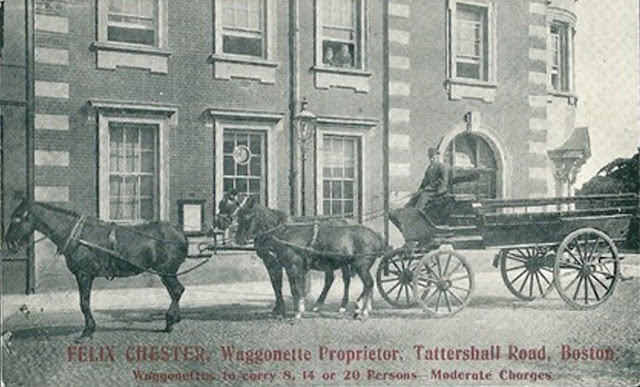 A photo taken outside the main Post Office in Wide Bargate.
They really, I suppose, represented a kind of rudimentary rural bus service in the days before motor buses came to the town, which was (Mr. Jenkinson thought) in about 1922.
Boston's first Bus service was operated by a company called the Underwood Omnibus Company, replaced some three or four years later by the United Omnibus Company. Very soon afterwards, local enterprise in the person of a Mr. Smith augmented the area bus network with his "Smith's Safety Services" comprising two double decker buses proudly named "Lion" and "Lioness". By the late 1920's there was a reasonably adequate bus network throughout South Lincolnshire, although some of the more rustic routes only saw a bus on a couple of days a week, hence the continued existence of a few, at any rate, of the carrier carts well into the late 1920's. 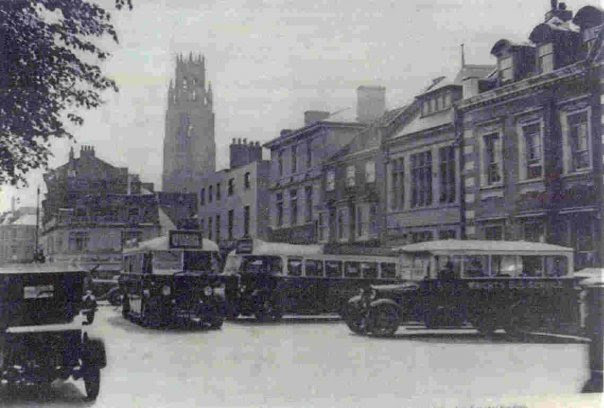 Some of Boston's early buses, again outside the Post Office.
The late Harry Fountain, an old Bostonian, said fifteen public houses catered for the carriers and their horses by providing a big yard or frontage and stables. He recalled that the Corn Exchange Hotel (that once stood on the Marks and Spencer site) had six carriers on the frontage and put up 12 horses in 3 stables.
Some of the other public houses concerned were:
The Axe and Cleaver
The Cross keys
The Falcon
The Globe
The Kings Arms
The Peacock and Royal
The Ram
The Red Lion
The Red Cow
The Waggon and Horses
The White Hart and the
White Horse.