Mr and Mrs Hilliar of Pinfold Lane in Boston had only been married for two
months in 1901 when they found out that married life didn't run smooth all the
time. She was 77 years old and he was 56. Their marriage started out fine, the
ceremony was performed by the chaplain and when the happy couple reached home
they entertained the whole district with two barrel organs which operated for
many hours opposite their dwelling to the delight of an admiring crowd. But, as already stated, only two months later they entertained the whole district yet again, but this time not with barrel organs. 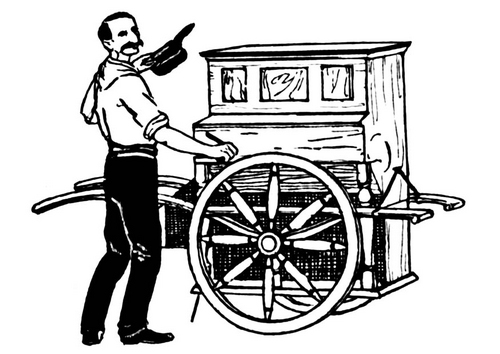 A dispute arose between the couple with the result that the aged wife evicted
her comparatively youthful spouse, who at the time was only partially clothed,
and in endeavouring to escape from his irate better half his trousers fell over
his boot tops. Mrs Hilliar at once grasped the situation,  nimbly following her
retreating husband she seized him and administered to the intense delight of the
spectators a severe beating on the buttocks. Later on that night a more serious
encounter between the couple took place, in the melee the table was smashed and
arming herself with one of the legs Mrs Hilliar quickly ended the combat by
cracking her husband on the head, knocking him down senseless. The rumour spread
that the man had been killed and the police were sent for. 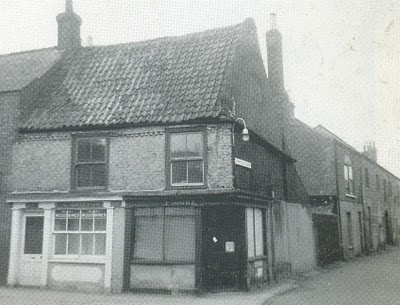 The corner of Stanbow Lane and Pinfold Lane, pictured in 1964 when all this area was due for demolition. When Mr and Mrs Hilliar lived in Pinfold Lane in 1901 it was a community in itself, with shops, pubs and dwellings.

Detective Sgt Sparrow was soon on the scene and though he didn't find the house
"swimming with blood" as had been reported, he discovered Mr Hilliar propped in
a chair, covered with blood, while his dutiful spouse, who was nearby,
presented, in the glimmering light of the table lamp, almost as ghastly an
appearance as her husband. She too was covered with blood, but  it was caused by
her hugging and kissing her husband, as some sort of compensation I suppose for
having half killed him.
She was marched to the police station and took before the court and Sarah
Hilliar, aged 77 years, living at 5, Pinfold Lane, was charged with assaulting
her husband, Charles Hilliar, a french polisher, aged 56.
Mr Hilliar appeared in court looking very spruce in a trilby hat, light
trousers,  black coat and a mole-skin vest, and during the proceedings Mrs
Hilliard (when she was not weeping) cast loving glances at him.
He said he went home that evening and found his wife in drink, they started
quarrelling and she struck him on the head with a table leg which he identified
as the one produced in court. He did not remember any more, only that his wife
was taken away to the police station, he did not wish to press the charge.
Mrs Hilliard, who was weeping bitterly all the time said that she was very sorry
for what she had done and begged the court to let her go home and see to him.
She said they had lived happily until the previous Thursday and "Before the
Lord" she was sorry for what she'd done and hoped her husband would forgive her.
At this, Mr Hilliard got out of the witness box and placed his hands on the
prisoner's shoulder and said to her, "Oh, say no more",  which bought loud
laughter in the court.
When asked if she had any further remarks to make the prisoner said "I beg your
pardon my Lord Mayor (which bought laughter in the court) I hope you will let me
go back to my husband, we will live as happy as birds of the air (which brought
more laughter) I have nothing against my husband and I know my Lord Mayor that
he will be glad to receive me back again. I really have nothing against him. If
there is a fine I hope you will give me grace to pay it. I have only 10
shillings a week to play with and I beg you to give me grace and allow me to go
home with him. I know I insulted him and he insulted me as well, and called me
foul and bad names, and that was what made me hit him. I am sorry I did it, but
for what I have done, in the presence of The Lord,  I am sorry. Since I have
been locked up in the cells I have not been very well and I have had three fits.
She was fined 10 shillings, with 23 shillings and sixpence costs, and was given
a week to pay it. She left the court saying "Oh Lord! I cannot do it", which
brought forth  more laughter.
Posted by Billy at 3:43 pm