Nathaniel Wright was 101 years old in 1904 and remembered five sovereigns
sitting on the throne of England. He looked back on his life and here are some
of the things he told us.  "I like a glass of beer for my dinner", he said "I
never learned to smoke, what is the use of putting a pipe in your mouth and
blowing out clouds of smoke? Half the folks now kill themselves from drink and
other bad habits. I never had a doctor, I have been a hard-working man - all my
life up at 4 o'clock in the morning regularly. Now I can go to bed at 6 o'clock
and sleep all night, and have never had an ache or pain".
In his boyhood Mr Wright met with an adventure which nearly put an end to his
career. He told the story with great relish. "I was raking in the yard," he
said, "walking backwards, when I fell into a deep pond. My mother, who saw me
tumble in, ran to my father, who was threshing in the barn, calling out, 'Our
Nat's drowned.' My father at once rushed to the pond, and I was pulled out. They
thought I was dead, but I soon came round and here I am still."
Mr Wright was actually born at Leake, a village about eight miles from Boston,
and his father was a farmer who also followed the occupation of a slodger, or
fowler. 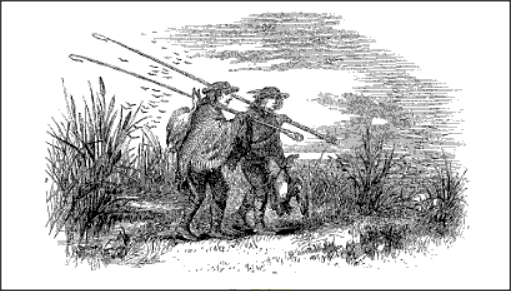 Fen Slodgers.
Before the fens were drained they swarmed with wild ducks, geese, teal,
tern and many other kinds of water fowl, and proved a source of great profit to
the slodgers, thousands being sent yearly to London and other markets. "The
wildfowl came in thousands," Mr Wright said, "and I have known my father to kill
scores at a single shot. There were also a good many decoys in the Fen. One was
eight acres in extent, and the owner of that particular decoy, a man named
Williams, possessed three dogs trained to tempt the birds into the decoy. One of
those dogs was named 'Shall you come?' the second 'Catch it,'and the third 'Kill
it.' "
Mr Wright lived in a dwelling on the old Roman bank composed of turf walls and
mud, and when the drainage of the fens commenced there were no houses for the
thousands of men who came from all parts of the country attracted by the high
wages offered, six shillings and seven shillings a day being earned by the men
employed on the works. In most cases the men brought their families with them,
and the problem of where to live was settled by the erection of huts of turf and
mud.
"There was no coal and very little wood in those days," said Mr Wright, "and for
fuel we had to burn peat and dried cow dung. There was no wheat or oats grown,
and the bread was made of barley meal. It was baked on the hearth, the hot
embers being raked over it, and I can well remember that as we sat round the
hearth we could look up and see the stars shining above us. We had no plates or
dishes, using wooden plates and tins, and when we got some china we treasured it
as if it were gold." "I never went to school," continued Mr. Wright, "but an
uncle taught me to read and write. When I grew up I  became a carpenter and
followed that occupation all my life."
"I remember the news of the Battle of Waterloo being received as well as I do
anything that occurred yesterday. I did not often go to Boston in those days,
for fear of the press gang. I had no desire to be a soldier, though two uncles
of mine were soldiers, and another one was at the Battle of Trafalgar. I
was at Boston, however, to see the illuminations when peace was proclaimed. 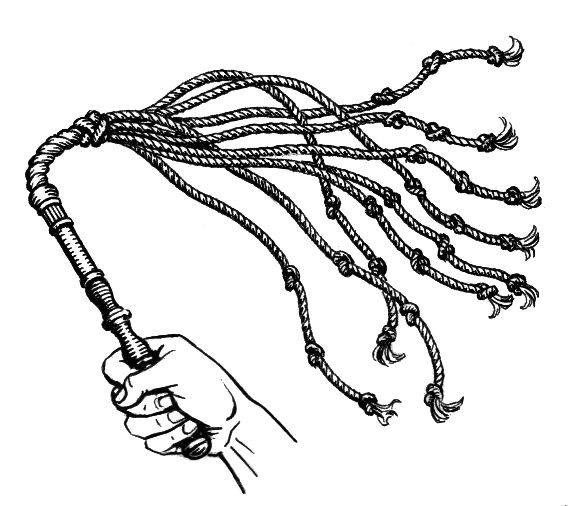 "A sight I shall never forget was seeing two men flogged at Boston. That took
place when I was a boy. Two strapping  young fellows, pretending that they were
cripples, had been begging in the market. They were taken before the justices
and ordered to be flogged. They were marched round the Buttermarket (which once
stood in the Market Place) four or five times in charge of two constables, while
a man followed behind lashing them with the cat-o'-nine-tails. Before they had
finished the blood was streaming off their backs. I then made up my mind if that
was the result of doing wrong, I would go straight, and I may say that I never
appeared before the magistrates except once, and that was when I was sworn in as
a constable." 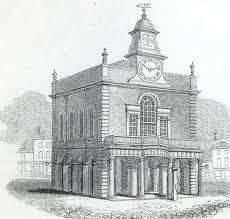 The Buttermarket once stood in the centre of the Market place. It was around this building that the two young men were flogged with the cat-o'-nine-tails.

Mr Knight shook his head over the changes that had taken place in regard to
dress since his early days. Young men were then content, he said, to go to
church in white slops and knee breeches, while the girls wouldn't think of
spending so much on dress as they do now. "When I was young man," said Mr.
Wright, "the girls wore hoods which quite covered the face, and when you wanted
to kiss a girl," he added with a laugh, "you had to turn the hood back or you
couldn't manage it." He was also of the opinion that young men and women marry
to early nowadays, he was 27 before he got married. Owing to the long war,
however, young men were scarce in the country districts, and many girls were
unable in consequence to get sweethearts.
"There were no traps or spring conveyances then," continued Mr Wright, "and the
farmers went to market on horseback with their wife's behind them. There were
stocks in every village in those days, but I can only remember once seeing any
of them occupied." The changes I've seen are so great that sometimes, as I sit
by the fire, I wonder if it is the same world I was born in."