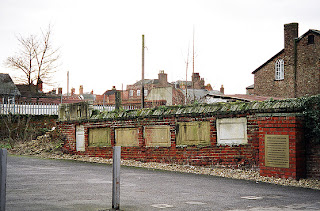 The site of the graves in 2001.
In White Horse Lane (the small lane off High Street, opposite Liquorpond Street) there was once a Burying Ground.
The first burial there was that of "Nimrod Hollgarth", buried on 23rd. July 1767.
The cemetery was generally called the "Anabaptists burying ground" until 1788. In 1789 and afterwards it is called the "Dissenters burying ground" and was closed in 1847, except for families possessing vaults.
It was closed entirely on Jan 1st. 1856 on the opening of the New General Cemetery on Horncastle Road.
By 1897 it was reported that it was used as a common drying ground, that children played skittles with the detached portions of the gravestones and that chickens and pigs roamed there! 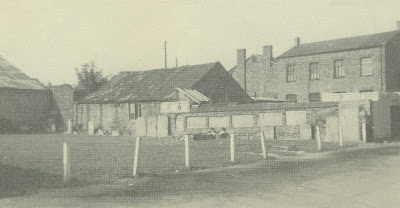