In May 1939 Mr. Edward White died at his home "Ashleigh" in Horncastle Road.
Mr. White, who was 76, entered his father's business when it consisted of just a blacksmith's shop and a wheelwright's and from such small beginnings he had seen it grow to a well known motor engineering business.
When he entered the business the internal combustion engine was, of course, unheard of and horses were the transport of the day. There were no frost nails for horses' shoes then, (a nail with a sharp head driven into a horse's shoe to keep him from slipping) and in the winter they were frequently kept busy "turning up" which consisted of removing the horses' shoes, turning up the ends so that they would bite into the ground, and replacing the shoes on the animal's feet.
His father was an accomplished iron worker and, in addition to making his own horse-shoes, made a number of pieces of fancy iron-work. These included two pieces for inclusion in the Communial rail of Boston Parish Church, a pair of gates measuring 18ft. by 8ft. for a country house and a panel for one of the gates of Fydell House.

His father allowed him to sell bicycles as a sideline (which were then in their infancy) and in 1881 he built an ordinary (Penny Farthing) bicycle on which he cycled to Sutton Docks. Three or four years after entering the business, he took it over from his father, and carried on with the cycle trade. They then began to build their own bicycles, and had their own enamelling and plating plant.
Mr. White also built the first motorcycle in Boston, he saw a similar machine at the Cycle Show at the Agricultural Hall. It was a Singer machine, with the engine in the back wheel, and Mr. White purchased the necessary components and built a machine in Boston.
The firm had their first car on show in 1898/99. 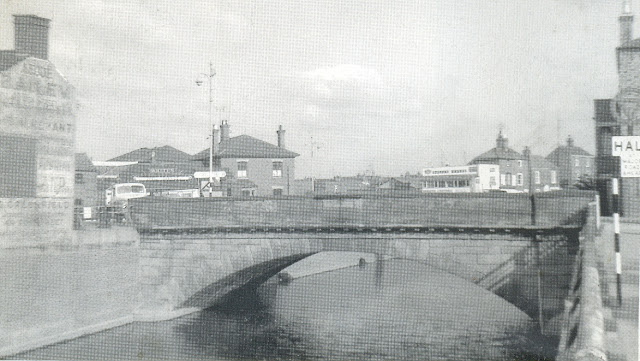 White's motor garage, Bargate End, can just be seen near the left hand side of Bargate bridge.