In 1909 Samuel Tonge was Boston's oldest worker. Everyone who knew him and admired him called him Sammy and he was 87 years of age in 1909. When he was 3 months old his parents moved to Boston from Peterborough where he was born in 1822. His father was an agricultural labourer and Sammy's life was rough and hard, but he weathered every storm and enjoyed the best of health. He was at work every day, employed by the Corporation to look after the cleanliness of the pontoon on Boston Dock, and his work was a credit to himself and to those who employed him. The conscientious manner in which he discharged his duties was known to everyone who had business at the fish dock.

When he was a boy he worked for Mr Jones, a Cooper, in Rosegarth Street, for a shilling a week. At that time the price of bread was Elevenpence 'aipenny per quartern loaf and onion gruel was the popular fare at  breakfast. He and his parents were then living in the now departed "Groom's Alley*" Subsequently he went to work with his father on the land, and later was employed in a brickyard in Butt Lane*. 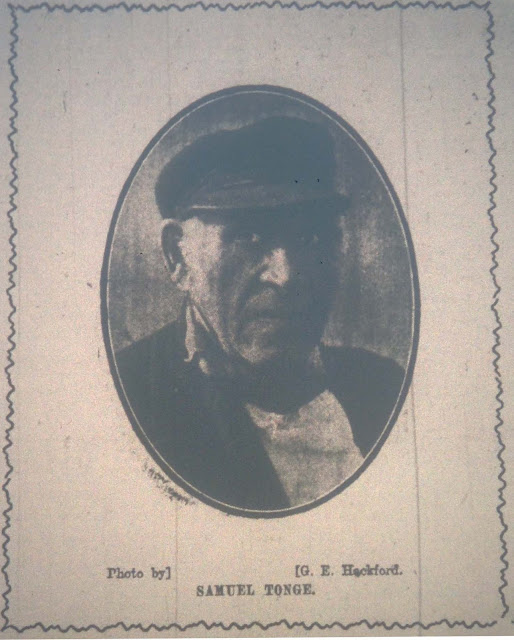 He didn't take to carrying bricks and so he ran away to sea. He went on Mr J. King's fishing smack for a start he was 13 years of age at that time. Afterwards he served on the "Daisy", of Boston, under Captain Lister, trading between Boston and Stockton, carrying corn from Boston to Stockton, and coals from Stockton to Boston. Then he was on the "Blessing", with Capt. Sissons, trading between Boston and Lincoln, and later he was mate of the schooner "Ellen," of which Mr. Baldwin was the skipper. He continued to go to sea until about 1889 when he obtained his position with the Corporation.
By 1909 Sammy was living with his son Chris, in Tuxford Terrace, Mount Bridge. He had been twice married and by his first wife he had four children all of whom were dead. He had been on a voyage in the "Princess Royal," of Hull, and returned from Oporto to receive the news that his wife and children had died during his absence. His second wife had died 16 years previously and by her he had 10 children, seven of whom, four sons and three daughters, were living, plus he had 29 grandchildren.
He was known to like singing his favourite song "The Lass o' Glasgow Town," and was once a champion hornpipe dancer.
The old age pension had just been introduced and asked if he had one he replied, "What do you think? I can earn my own living. I am an old sailor!"

Groom's Alley is unknown to me.
Butt Lane is now Carlton Road.
Posted by Billy at 10:03 pm