One of our aircraft is missing

One of Our Aircraft is Missing (parts of which were filmed in Boston) is a 1942 British war film that was made under the authority of the Ministry of Information. It begins dramatically with the crash of "B for Bertie", a  Wellington bomber whose crew were forced to bail out over Holland after one of their engines was damaged during a night time raid on Stuttgart. It goes on to tell the story of how they are helped by the Dutch resistance.Many of the outdoor scenes set in Holland were filmed at Boston (as in 1942 the Germans still occupied the Netherlands) and many of the town's landmarks are visible in the film for example the quaysides, the Railway Swing Bridge (below) and the Church house at the top of Wormgate. 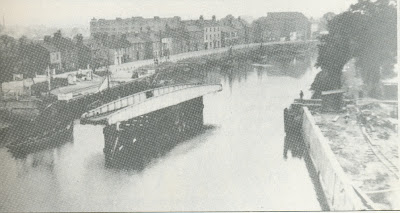