Just found a few bits and pieces while cleaning up my hard drive so have put them together to tidy them up. 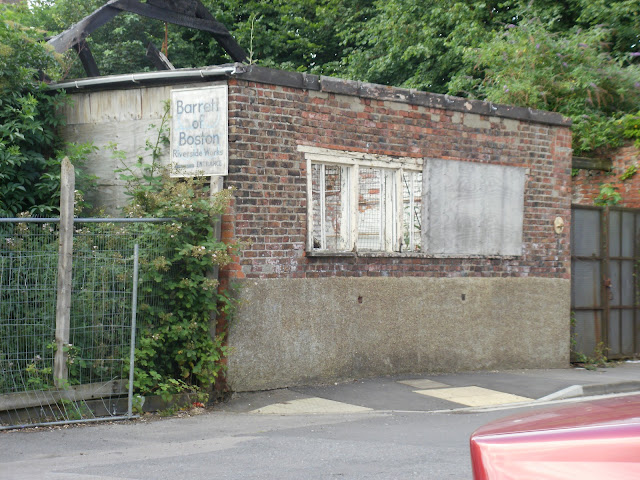 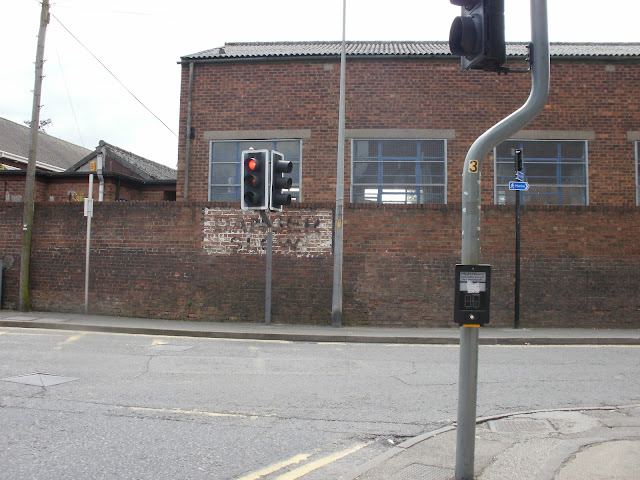 The old "Danger Slow" sign at the bottom of Sluice Bridge that was used before the traffic lights were put up. 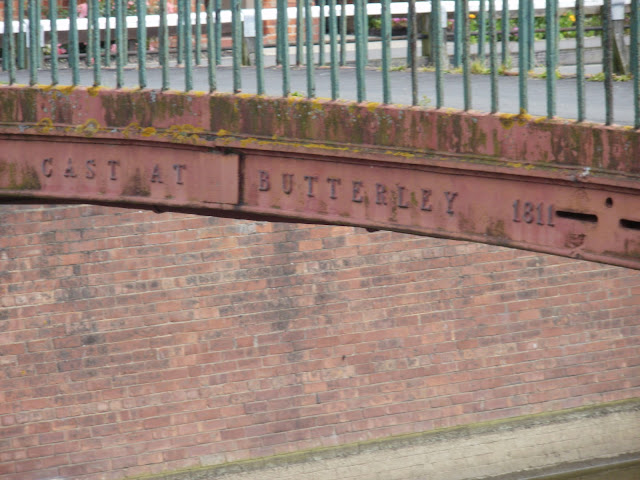 The Hospital Lane footbridge over the Maud Foster showing it was cast at Butterley in 1811. 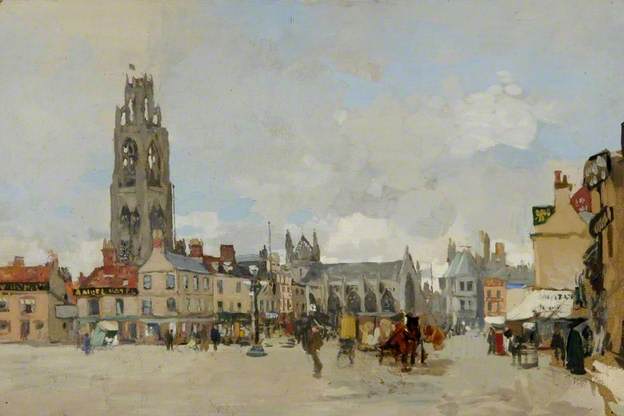 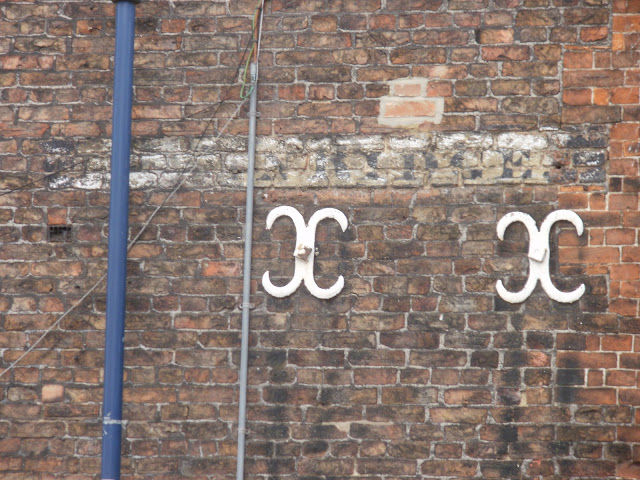 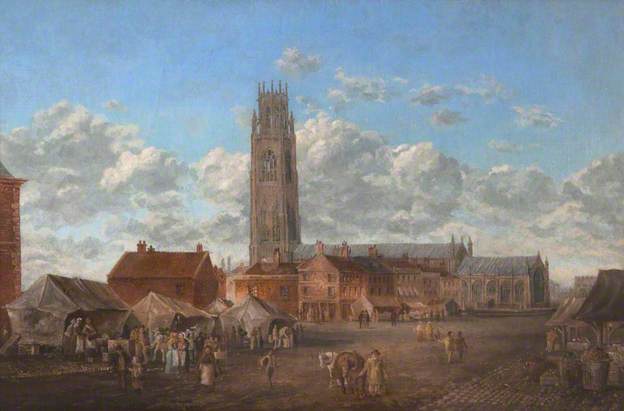 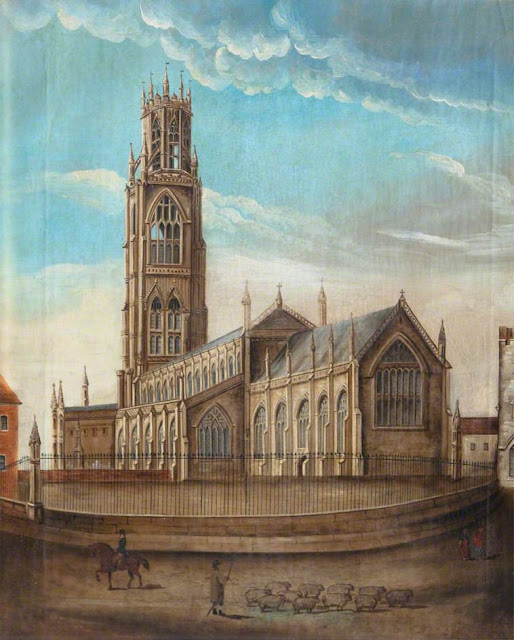 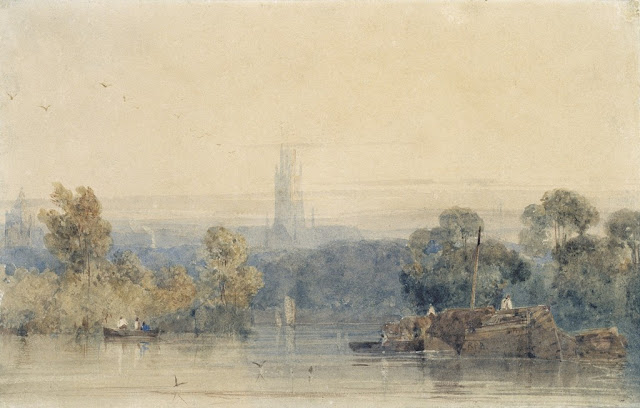 The Stump and river. 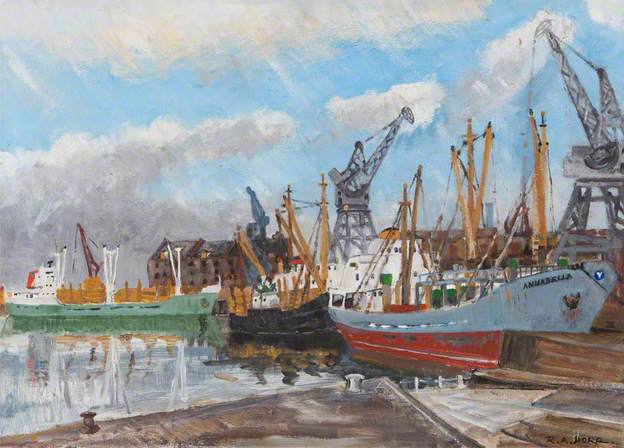 A painting of the dock.
Posted by Billy at 12:28 am No comments:

The Pineapple Club opened on Saturday December 16th. 1961, in premises at the rear of the Wimpy Bar in West Street Boston. Proprietors of the new club were LEB Foods Ltd. of Skegness, who ran Wimpy Bars in Grimsby, Cleethorpes and Skegness in addition to their Boston Bar. A spokesman for the firm said that the club was modelled on the Beachcomber Bar in London's Mayfair Hotel and they had had a lot of applications for membership and would probably have to limit the number of acceptances.

Designed to give the appearence of a Polynesian setting, the bamboo walls were decorated with brightly coloured shields and weapons, but the most striking feature was a seven feet by six mural. There was also a "long ears" stone figure - this one in concrete - similar to the genuine article to be found on Easter Island. Concealed lights behind the cane ceiling were designed to give an open air impression and there was even a palm tree (concrete of course). Another feature of the club was Castaways Corner, which was fitted out with an old cannon, (which came from a ship's chandler in Grimsby) a sextant and ships lights and wheels. When they opened they only had a small dancing area on the ground floor but in the following year (1962) they were hoping to open a large dining room for about 120 people on the first floor which could also be used for dancing.
Posted by Billy at 1:35 pm 3 comments:

In April 1959 the removal of an old partition and fireplace during structural alterations at Addy's the Wide Bargate photgraphers provided a surprise. For behind that fireplace they discovered another, an attractive brick built affair, believed to date back to the mid 1600.'s. It was cleaned and re-pointed and formed a focal point in the firms new showroom. The brickwork was cleaned up with spirits of salts and wire brushes and as the hearth had crumbled away a new one was made with bricks taken from an old boundary wall at the back, which was of a similar age. This wasn't the only discovery for the removal of several coats of paint revealed that some panelling in the room was of beautifully grained oak probably dating back to the same period. That panelling too was restored to its original beauty, while the oak from a further portion, on a wall that was taken down, was used to construct new show counters.


Above and below: Two views of Addy's photographic shop in Wide Bargate.

In 1960 one of Boston's three remaining lamplighters, Mr. C. E. Kirkby, of 8, Fydell Street, gave up his "beat" and did a less strenuous job at the works of the East Midlands Gas Board. For 15 years he had cycled and walked round 150 of Boston's gas street lights, lighting, cleaning, and winding the mechanisms that controlled them. It was in 1934 that Mr. Kirkby, a lad of 14 at the time, joined the then Boston Gas Company. His first job was emptying meters, then he became an apprentice fitter. The war sent him to Leicester, where he served with the R.E.M.E. until 1945. "When I came back they were short of lamplighters and I took the job," he explained. "It was as simple as that." His odd job meant odd hours. "Sometimes I didn't get finished till after eleven o'clock at night," he recalled. It meant working in odd weather too. "When there was snow on the ground the lights on the outskirts of town had to be missed. You just can't ride a bike with a ladder on your back through a foot of snow!"
Mr. Kirkby's round took him down Witham Bank West, Carlton Road, Frampton Place and the Tattershall Road area. "I estimate that some days I biked well over twenty miles." he declared. "When I first started doing the job, there were over five hundred gas lights left in the town. Now they are disappearing," he said, with a hint of regret. "Don't suppose there are more than two hundred left now." He explained that the Gas Board maintained the lights for the Corporation. When he retired from the work, he wasn't replaced, and it left only two lamplighters in the town.
Posted by Billy at 9:42 am No comments: 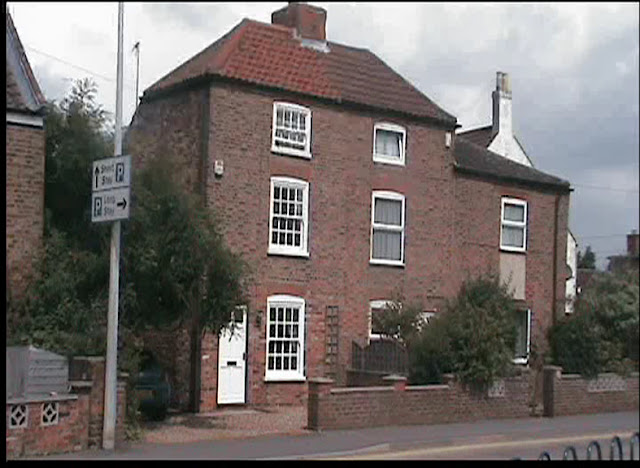 "The bricks were laid in earth," Mrs. Forster said at the time, "then beneath the earth was a layer of ashes, and beneath that a layer of chalk, and the bottle, standing neck down, was buried in the chalk." The bottle was cylindrical and was filled with what appeared to be a light oil. In cleaning it, Mrs. Forster would appear to have broken the seal for afterwards it contained a few air bubbles and there were none when she and her husband found it, and similarly some of the pins became dislodged from the neck and fell down inside the bottle.
From the obvious care with which it was buried, it would seem that it had a serious purpose and from its position in the chalk Mrs. Forster deduced that it had been there since the house was built. Incidentally, the bottle was buried directly in front of the outer door and about a foot inside the room. Could it perhaps have been intended to prevent evil spirits or witches or similar unwelcome visitors from entering the new house, or did some other strange belief or superstition lie behind its presence there?
Posted by Billy at 7:04 pm 3 comments: 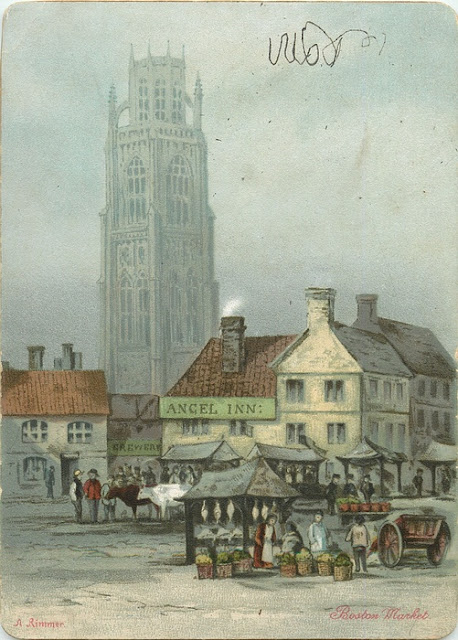 Above and below : A Christmas greeting card painted by Alfred Rimmer. 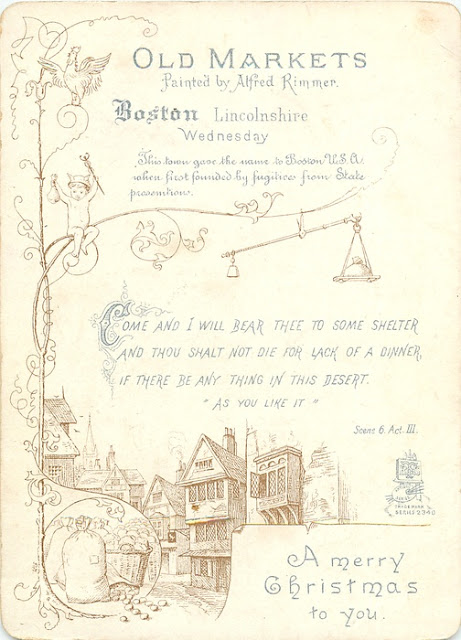 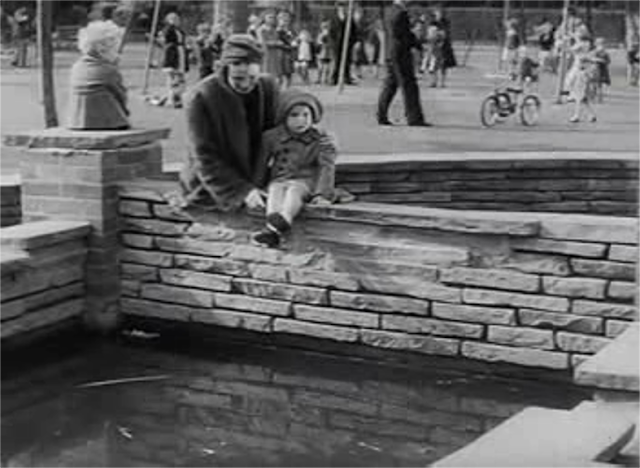 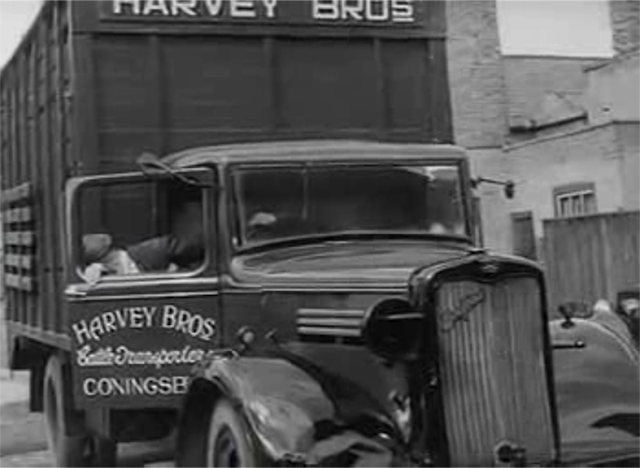 A Harvey Brothers lorry at Boston cattle market in 1943.

Boston has its own unique accent, below is an extract from "Highways and Byways of Lincolnshire" published in 1914 which describes how the fishermen and farmers of the town spoke.


Boston, having the Marsh farmers as well as the Fen-men meeting in her market, preserves a more racy dialect. I was once in the Boston Station, three people of the sea-faring class were there a tall, elderly man standing up, his son asleep on the floor, and the son's wife sitting and apparently not much concerned with anything.

The father, seeing me look at the sleeper, said " He'll be all right after a bit. My owd son yon is. He's a bit droonk now, but he's my owd son. A strange good hand in a boat he is, I tell ye. They was out lass Friday i' the Noorth Sea and it cam on a gale o' wind, they puts abowt you knooa, an' runs for poort. The seas was monstrous high, they was, and the gale was a rum un, an' the booat she was gaff-hallyards under. The tother men ' She's gooing ! they says, ' She's gooing ! But my owd son he hed the tiller. ' She's all right,' he says,and mind ye she was gaff-hallyards under, but ' She's all right,'he
says, and he brings her right in. Aye he's a rare un wi' a booat
is my owd son, noan to touch him. He's a bit droonk now, but he's my owd son."
On another occasion at Boston I heard one farmer greet another with " Well, Mr. Smith, how's pigs ? " a very common inquiry, for in Lincolnshire pigs fill a large space on the agricultural  horizon.
Witness the reply of an aged farmer, probably a little unmanned by market-day potations, to a
vegetarian who, with a cruelty hardly to be suspected in the votary of so mild a diet, had attacked him with " How will you feel at the day of Judgment when confronted by a whole row of oxen whose
flesh you have eaten ? 'Taint the beasts I'd be scared on ; it's the pigs ; I've yetten a vast o' pigs.' 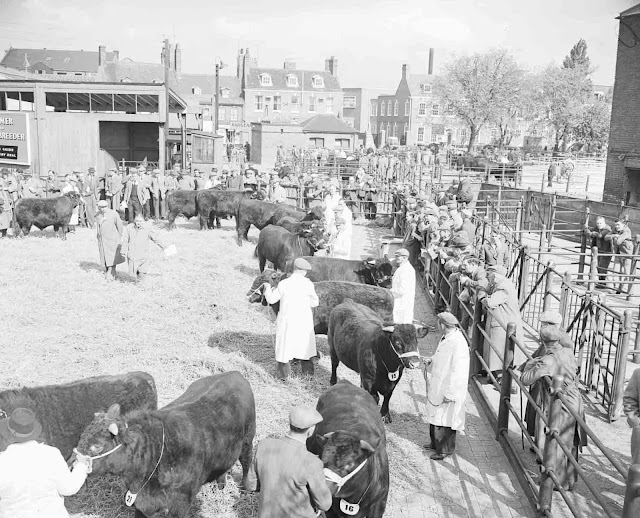