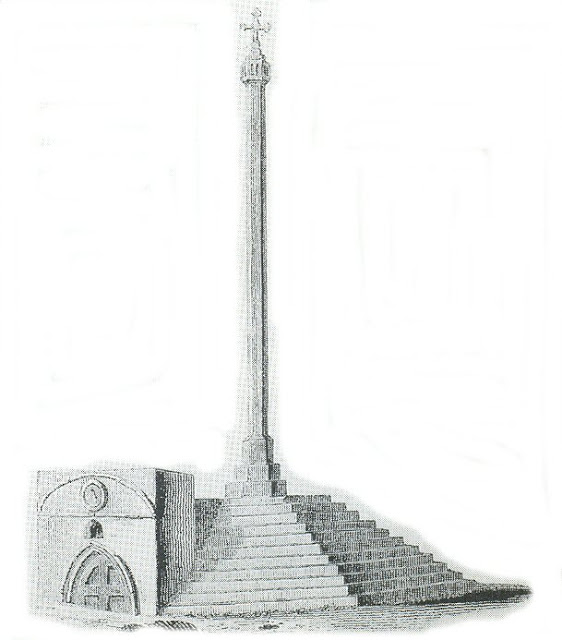 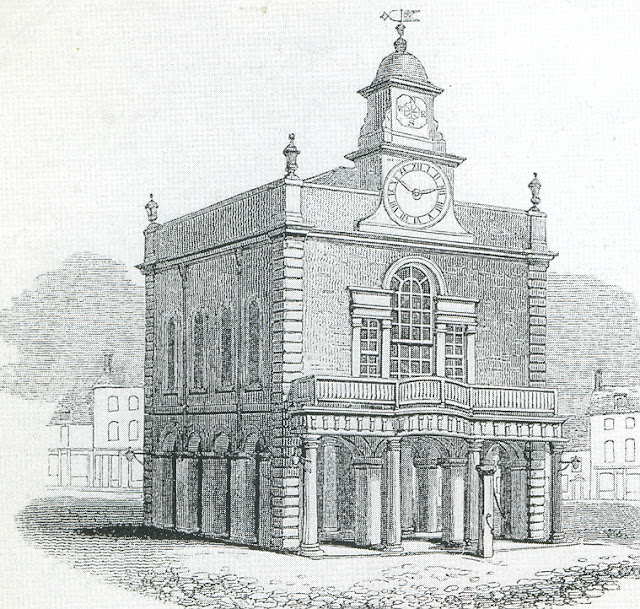 The first set of Lamps were presented to the town (and erected on the Buttercross site) in 1842 by Mr. Henry Rogers who was Town Clerk of Boston from 1816 to 1831. At first there was only a solitary light (see below in this 1842 print) 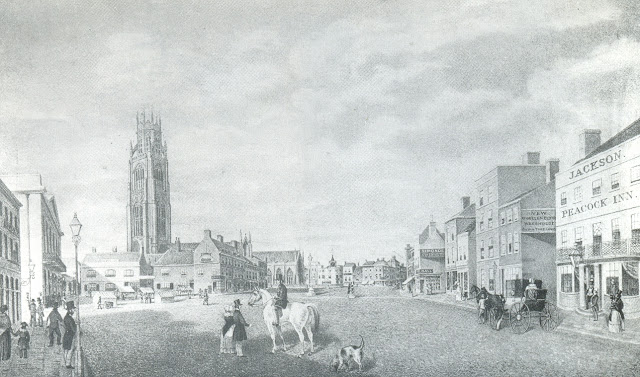 described by Pishey Thompson as ‘an ornamental and very useful lamp’ but four more lights were added by the Lighting Commissioners in 1848. 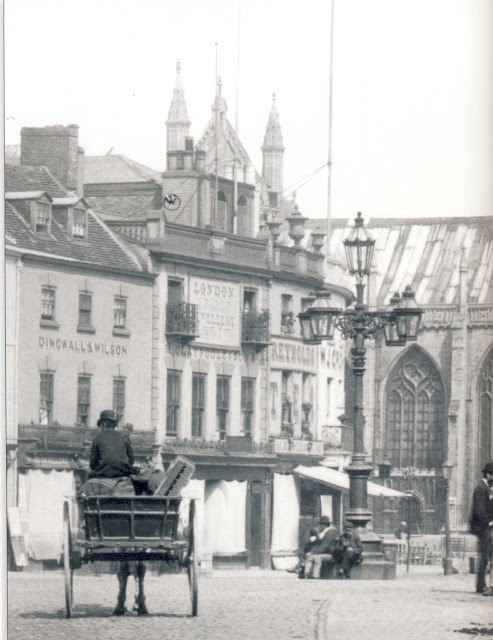 By 1927 the Lincolnshire Standard was saying ‘They have had their day, and now their bulky base is a hindrance to the increasing road traffic’, also in the same issue Mr. Thomas Kent said that ‘the old standard was modelled by his Grandfather, when the lamps were cast at that once flourishing local works, Tuxford’s foundry’
So it was that in 1927 a new column of electric lights (below) 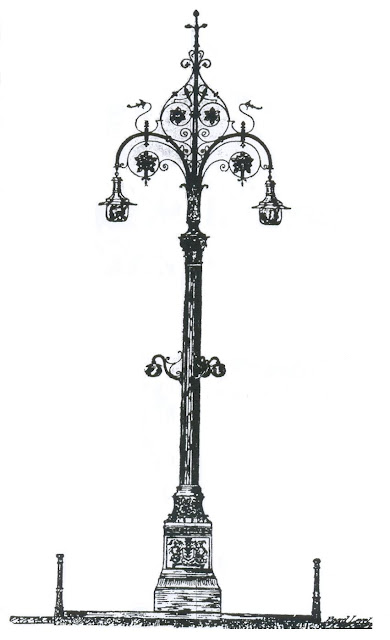 was erected and the tradition of the old lamps was preserved by having three smaller lights on the column in addition to the two main bracket lamps above.
By the time the photograph below was taken in the 1960's the three smaller lamps had disappeared, presumably to make room for the road signs. 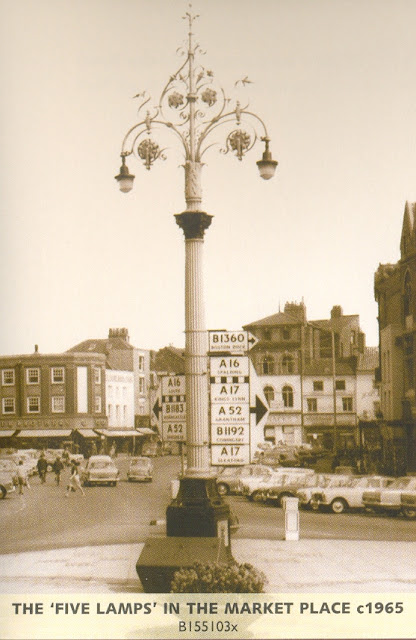 These lamps were themselves taken up and repositioned (below) 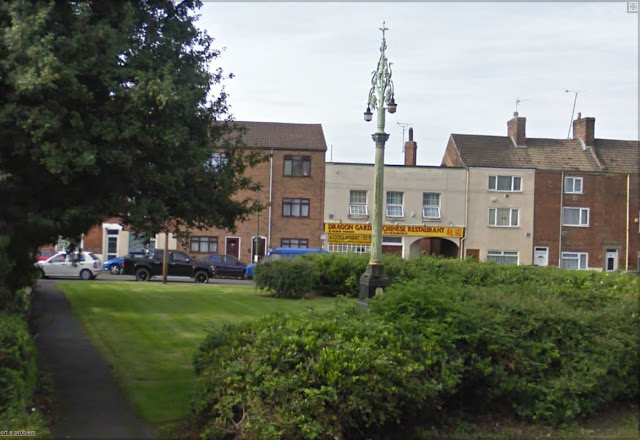 in front of the old Elephant and Castle pub in Liqourpond Street (which then changed its name to the Five Lamps but is now a Chinese Restaurant) where they can still be seen today.
For many years on New Years Eve the young (and the not so young I remember) tried to climb to the top of the lamps but the tradition seems to have died off now.
Since their removal various modern lamp standards have been erected and we are left with the characterless view we see today (2011 below) with even the traffic roundabout gone.
On a brighter note at the present time (2011) there is a plan to re-install a replica of the old Five Lamps or move the 1927 lamps back to their original position in the town centre. 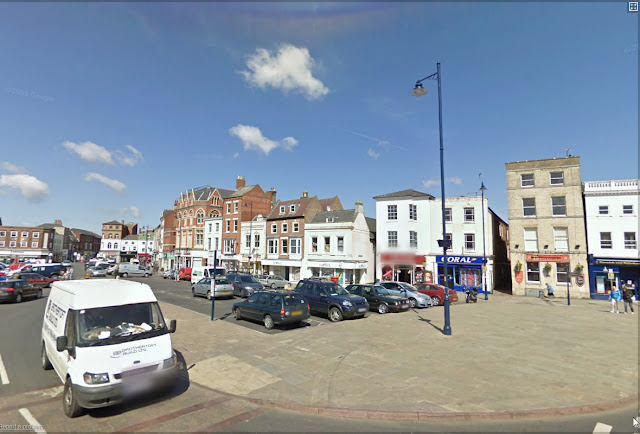 UPDATE. Finally on July 6th. 2012, the replica of the old five lamps (below) is erected in the Market Place and the story has turned full circle. 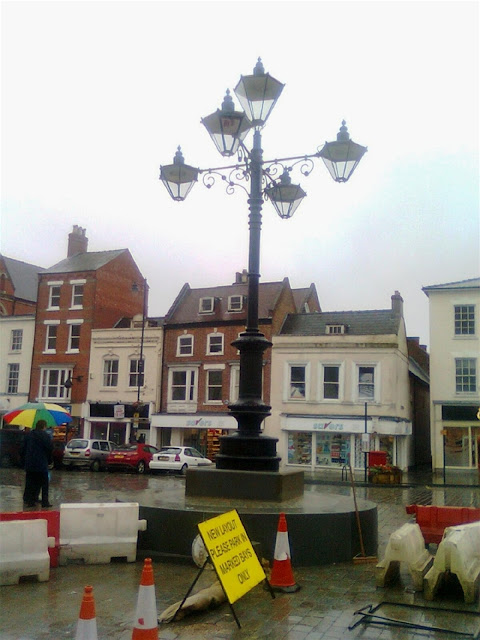