Indian Queen and Bull and Magpie

A letter from Pishey Thompson in a book entitled “Notes and Queries” published in 1860.

There is, at this time, a public-house in Boston, Lincolnshire, called the Indian Queen, it probably took its name from some fancifully dressed figures which I well remember were painted on its ancient sign-board. There were three figures, and these were so uncouth, and unlike anything known at that time, that the house had borne the name of "The Three Merry Devils." This tavern originally bore the name and sign of "The Three Kings of Cologne," but the sign faded, and the title became obsolete, and the medieval designation of the house was desecrated and degraded as I have stated. 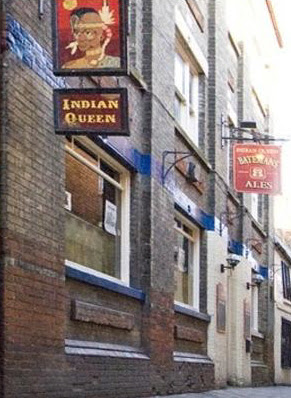 Another tavern in Boston has, at present, for its name the curious combination of "The Bull and Magpye," and bears for its sign a literal bull and as literal a magpye. This name and sign has also mediaeval origin. The ancient title of the house was the " Bull and Pie," both words having a reference to the Roman Catholic faith; the bull being the Pope's Bull, and Pie or Pye being the familiar name in English for the Popish Ordinal; that is, the book which contained the ordinances for solemnising the offices of the Church.
Pishey Thompson .

Boston Taverns and Public Houses (showing the Bull and Magpie) from Slater’s directory of 1852.
Posted by Billy at 6:52 pm