In July 1964 Mr. Arthur Windley, a poultry farmer of Mareham-le-Fen bought the remains of a horse drawn 'bus' which was being auctioned at Frampton. Mr. Windley managed to get the bus for nine shillings and even he at the time described it as "a heap of firewood" So why so much interest then? Well, the old horse drawn bus, minus chassis and forecarriage (which was eventually got to Mr. Windleys farmyard at Mareham) was one of Boston's two Red Lion buses which used to transport passengers from the Red Lion Hotel to the Railway Station.
Mr Windley was hoping to rebuild the bus to its original state, "It's in a terrible state, I'm going to have to spend a lot of money to restore it", he said.
I don't know whether Mr. Windley did restore the vehicle or not, maybe someone out there knows the outcome of this story? 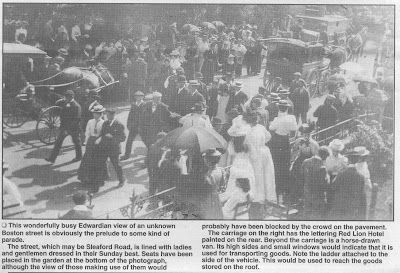 The horse drawn vehicle (above right) in the picture was a Red Lion Hotel bus.
Posted by Billy at 7:53 pm