Church Street today (2012) is a small, quaint cobbled area of Boston with shops, a cafe and of course the Britannia Inn. It has hardly changed since 1956 (picture below) the year when one lady, Miss Jessie Mason, who was born in Church Street in 1866, spoke of her memories of the street. 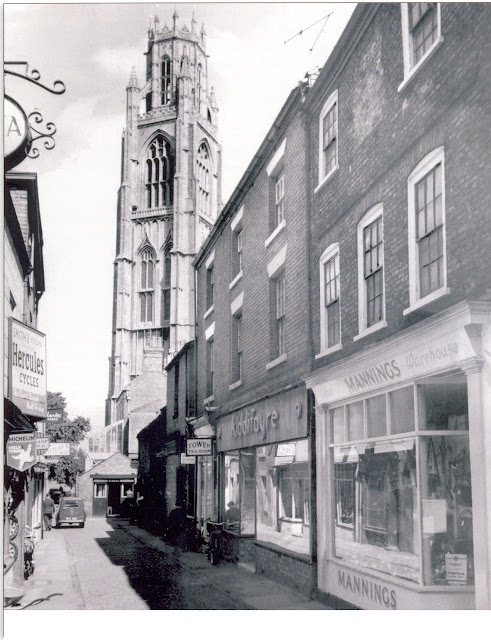 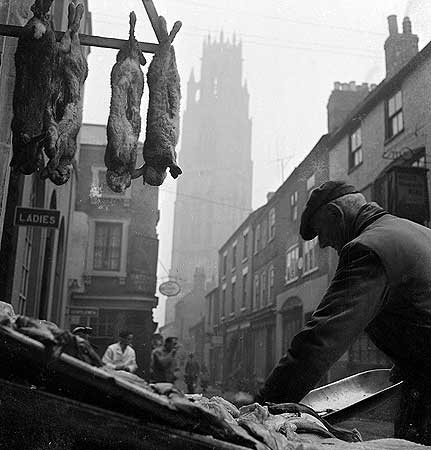 (above) An undated picture of Church Street, but obviously before Health and Safety days as the hung up rabbits show !

She recalled Miss Storr's school for infant boys and girls, Ward's carpet warehouse and Tuxford's goldsmiths and silversmiths. She admitted that she liked it better in her childhood but the memory was tempered by the thoughts of regular flooding at very high tides. These occasions she recalled caused great excitement. To the cries of "The eagre's coming, the eagre's coming," whole families would turn out to rescue what they could from the inevitable flooding and the men to tend their boats. Talking of the river, Miss Mason remembered skating on the River Witham six days a week for six weeks in 1875.
Lawyer Arkley, a well known figure in those days, was quite a character. She recalls he adopted a dictatorial attitude about who should enter the churchyard, and certainly wouldn't allow wheeled vehicles, such as perambulators, to pass through. There were four posts barring the way from Church Street to the Churchyard and Lawyer Arkley lived in the house on the corner opposite the Church Key so was therefore able to keep a sharp eye on all who passed.


Mr. Hackford, in the top hat, standing outside The Church Key, Lawyer Arkley lived in a house opposite out of shot of the picture but the 4 posts can be clearly seen. The Stump in this view would be directly behind us.

There was a butter market in those days, held at the opposite end of Church Street. Here sat the country women with huge baskets of butter and eggs, it was a flourishing market and brought a lot of business to Church Street. The Church Key, so called because the keys of The Stump were kept there, was the home of the verger for many years Mr. G Hackford. Some people believe the Key was originally spelt Quay and with steps on the wall on the riverside and old prints showing boats unloading there this could be true.
Posted by Billy at 12:24 am