A Grotto and Museum at The Whale Inn.

The Whale Inn (now demolished) in Main Ridge was once the home of a remarkable grotto and museum which, in years gone by, delighted many visitors and townsfolk. I remember seeing the last remnants of it in the early 1960's because luckily my Uncle (Bill Butcher) was the landlord of the Whale at that time. It was situated at the rear of the Whale and not the least interesting feature were the remains of some of the the old St. John's Church, which was at one time situated at the south end of town, and of which nothing now remains. 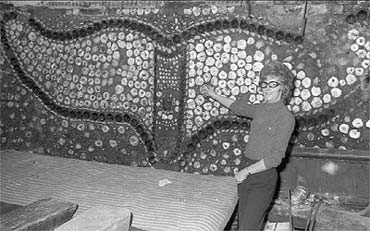 The room in 1971. The Inn was finally demolished a few years later when the Inner Relief Road was built through the town.
The museum and grotto was arranged by a Mr. Richard Ball and gained well deserved fame for the remarkable and original designs worked in the wall of the room in which the museum was held. These designs were worked entirely with various shells (chiefly oyster and cockle) and bottle necks. Worked in the wall in shells, could be seen a whale's tail, an elephant, a man shooting a bear and other decorations. At one end of the room was a sedilia, a stone seat for priests in the south wall of a chancil. This sedilia undoubtedly came from the Church of St. John and was probably acquired by Mr. Ball, together with many other relics of the church. These relics, chiefly carved heads and gargoyles, were to be found in the museum or in the grounds at the back of the Whale Inn. Even on the garden wall could be seen pieces of stonework which had obviously come from some ecclestical building. The principle feature of the museum was a skeleton of a Whale, measuring over 53 feet, which was captured in the Boston Deeps in 1847, visitors could enter the jaws and pass beneath the massive skeleton.
Posted by Billy at 9:33 pm