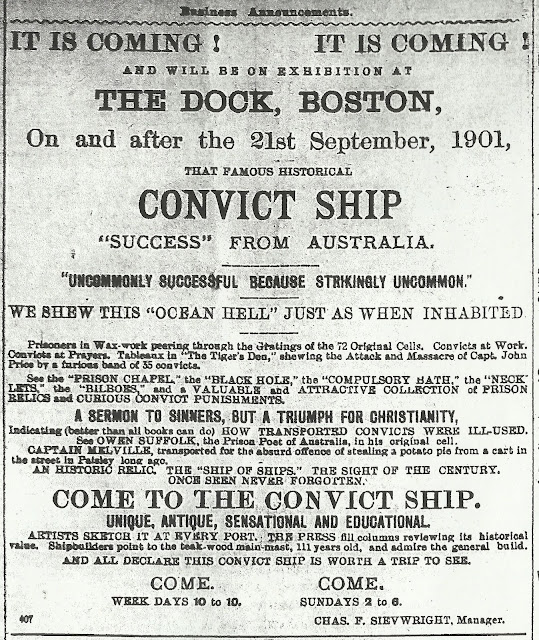 In September 1901 the ship "Success" visited Boston Dock. In a career spanning 106 years, the Success served as a merchant ship, emigrant ship, penal hulk housing men, women, and boys, explosives and store hulk, and finally, exhibition ship. She toured the world for the most part successfully for fifty years. As a sailing vessel her career is unparalleled. For an incredible span of 106 years she voyaged the world’s oceans and waterways. There are no truly reliable figures, but it is believed that tens of millions of people trod her decks. She has witnessed scenes of both immense happiness, and unspeakable suffering and death. 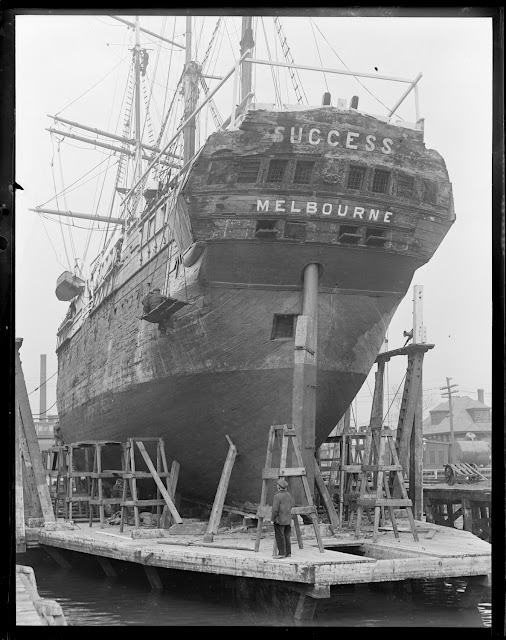 The "Success", this photograph was not taken at Boston.

On board her men, women, and even children have been imprisoned, couples have been married, and U.S. Marines recruited. She has transported indentured servants to work on sugar plantations and poor farmers to a new life across thousands of miles of ocean. She has seen wild parties and beauty contests. Her visitors have included royalty, movie actors, politicians, and numerous other celebrities. She has been both praised by politicians and preachers as example of "man’s inhumanity to man" and an object lesson in prison reform, and vilified as a fraud and a hoax. She’s even been called "The World’s Most Hated Ship"! She has been sunk, grounded, rammed and burned, and until time finally caught up with her one fateful day in 1946, her nearly indestructible teak hull always survived.
Posted by Billy at 4:59 pm