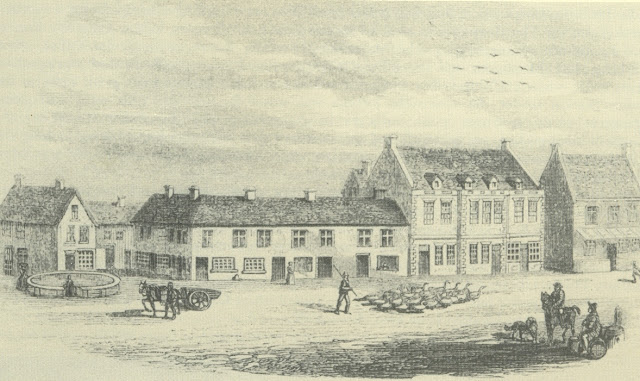 The old Boston Market Place. This was where the fish was sold prior to the time that Mr. Locks talks about. The circular structure to the left was the Fish Slabs.

"A picture that comes back to me is that of a summer morning in olden times, before the era of  railways. At the fish market at 5 AM all was life and bustle. The coachmen and guards of the "Mail" and "Perseverance" coaches were there, amid a crowd of other buyers, bartering and haggling for the famous Boston Deeps soles. They would purchase all the large and medium fish, well knowing that they would readily dispose of it among the gentry on the road between Boston and London. No sooner had these worthies departed then the tradesmen and leading residents would come in. They were early risers in those days, and the smaller soles would be disposed of to them at the rate of about eight pairs for a shilling. The business went on until 11 AM, when the old Fish Market was closed for the day.
Later the old wooden slabs for the display of fish were replaced by slate, and gas was laid on as a substitute for candle lanterns. The oyster fishery was then a very prosperous one, the Boston Deeps oyster being as famous as the Boston Deeps sole. During the season thousands of these shellfish were landed, and were piled in great stacks from one end of the stalls to the other. How plentiful these delicious oysters were may be imagined from the fact that they were sold at the rate of three a penny. Unfortunately, however, the greed and selfishness of certain fishermen struck a blow at the industry from which it never recovered. Not only did they remove from the beds the "brood"oysters, or "patches," as they were called, in order that they might sell them for "beer money," but the beds were weakened by over-fishing and the dispersal of the spawn. This, and the choking of the beds with mud, led to their destruction, and the Boston Deeps oyster almost became a thing of the past. Efforts have recently been made to re-establish the beds, and it is hoped they may be successful. It is deplorable to think, however, that for the sake of making a paltry tuppence to fourpence a score for these unfit oysters, incredible injury should have been done.
Further changes were made in the old Fish Market as time went on, and the salesman, whose faces were once familiar, have gone, one by one. That part of the building where I carried on business for many years, and where my father was established long before me, has been taken by the Corporation and transformed into public lavatories. Familiar names have disappeared, and I alone am left of the old merchants who were the pioneers of the fish industry in Boston. Strangely enough, the alterations and improvements which were commenced a year ago, have brought me back to the site which I occupied several years ago - the first stall from the Assembly buildings in the market. The ancient Fish Market was what Dickens would've termed "a cold nosed, stony toed, dreary place" in which to do business, and the biting winds searched through the open railings, chilling you to the very marrow. The modern Fish Market is bright, comfortable, and attractive. The oyster and other shell fish trade is carried on at a bar or saloon at the rear, the front portion, facing the street, being arranged for the sale of other fish, which comes in daily from the pontoon. Here, under the supervision of my son, the traditions of Ye Olde Fish Market will be continued on the newer and more up-to-date lines, which present day conditions require, and I fancy that if some of the former residents could revisit the scenes of their youth, they would be considerably surprised at the variety and cheapness of many denizens of the deep which were almost unobtainable in their day."
Posted by Billy at 10:18 pm