In May 1908 a thunderstorm which passed over Lincolnshire did some serious damage to the tower of Boston Stump. During the height of the storm a tremendous crack of thunder, preceded by a blinding flash of lightning, was heard.

The inhabitants rushed out of houses and shops, to find that the tower of the church had been struck. One of the pinnacles at the top of the tower was dislodged, and the main portion of the masonry, half a ton in weight, crashed through the lead roof of the belfry and, striking the bells, caused them to ring. Other portions of the masonry fell on the pavement outside the church, a much frequented causeway, but fortunately no one was injured. 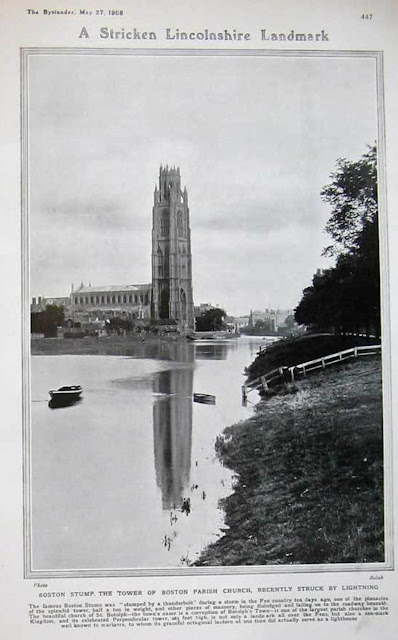 On a previous occasion in August 1900, while the congregation was at service, a pinnacle crashed through the roof of the tower and the church, falling near the font, and also in July 1893, the pinnacle at the south-east corner of the tower was lopped off by a storm and hurled into the narrow thoroughfare through the churchyard and embedded itself in the pavement. This was the same pinnacle that was struck in May 1908, but then it fell inwards on the roof of the belfry, crashing through the lead work in two places and tearing away a large portion of the timber roof. One of the beams fell on a bell, and the strange note it produced was heard all over the town above the din of the storm, and added to the weirdness of the scene.
The 1908 one, happened on a Wednesday market day and of course the town was crowded with people from surrounding towns and villages, and several of them actually witnessed the striking of the tower. Two ladies, visitors to the town, had a very narrow escape. They had been up the tower to look at the surrounding scenery, and were descending when the storm commenced, and had barely reached the floor of the church when the total shock occurred. Part of the dislodged pinnacle fell into the churchyard, and buried itself in the ground between the footpath and the church wall. A piece of stone struck the iron rails on the church side of the pathway and bent them, and then rebounded into the west doorway. Smaller fragments were hurled for many yards, and it was surprising that no one was injured. The greater portion, however, fell inward and crashed through the lead roof of the belfry in two places.
At first it was feared that the interior of the church was damaged, pieces of plaster had fallen from the roof but otherwise no damage was done.  The tower was filled with smoke and for a time it was feared that the lightning had set fire to the belfry. Mr Hackford and some others immediately went up the tower to investigate, and were confronted with an almost overpowering smell of sulphur, but fortunately there was no fire. 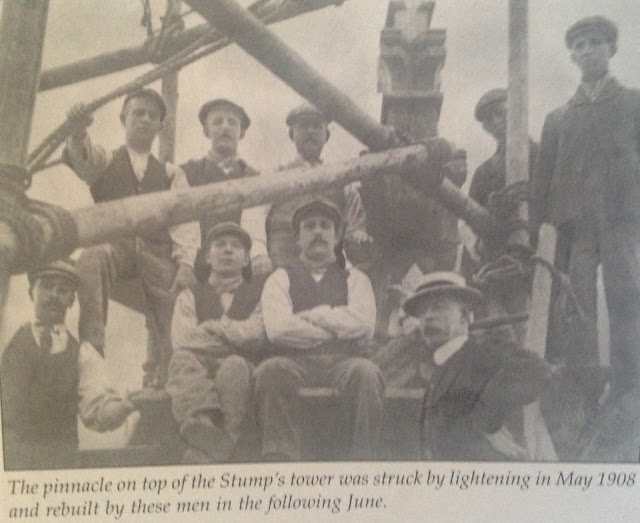