During the 1960’s the Lincoln Lane area (almost opposite the Stump on the other side of the river) was demolished in preparation for redevelopment. 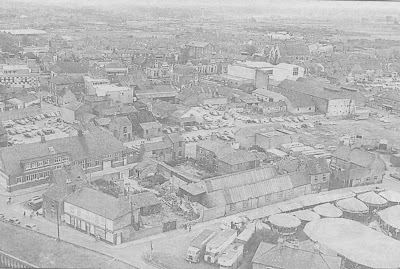 The Blue Lion on the corner bottom left, and the Victoria Inn on the far right corner.
The area included Irby Row, St. George’s Lane, Lawrence Lane, Leicester Square, Pinfold Lane, Stanbow Lane, Rosegarth Street and Lincoln Lane itself. Earlier demolition and the passage of time had already brought Lincoln Lane to its knees and from 1932 to 1961 between 75 and 100 properties had been pulled down by the Corporation or by their owners. 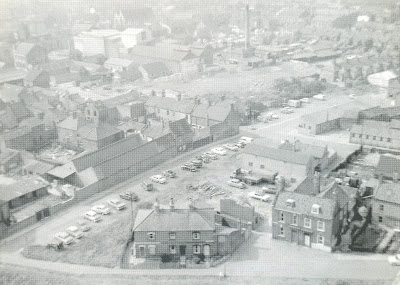 Many of the buildings and homes were up to 200 years old and four of the Stanbow Lane cottages were once used as a hospital. 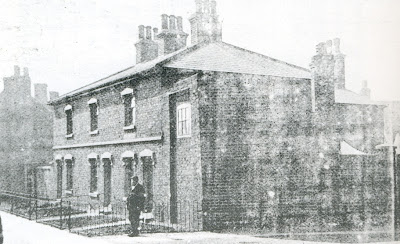 The cottages that were used as a  hospital in Stanbow Lane.
When it was built the area was a prosperous place, boasting among other homes, two or three large merchant’s houses and gardens. It was mainly residential but later a few pubs (the Stag and Pheasant, the Hop Pole, the Victoria, the Blue Lion etc.) appeared as well, and then, as slum clearance produced waste land, shops were built and industry edged a foot in the doorway, including the shoe lace factory of Arthur Whittle and Co. Ltd., a slaughterhouse, George White’s saleroom and even the Fire Station had its home there but by 1961 there were fewer than fifty houses occupied. 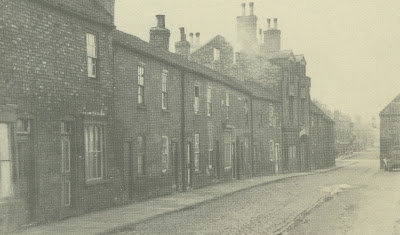 Part of Lincoln Lane.
But what of the residents in 1961 that were told they would have to leave? At the Victoria Inn, Mrs. Agnes Berry, wife of the landlord said, “I’m not really bothered, but I know most of my customers are” she also looked back at some of the characters of the area she knew, there was Topper, (a chimney sweep who sported a top hat) Shetty, Weary butterfly, Sooty Sue, Old Pol Simpson, Old Nel Drury……….
At 13, Rosegarth Street, lived Tom and William Cushley, brothers (at 66 and 70 respectively) and both retired Corporation dustmen. Tom had won the Military Medal in the First World War and it was his fourth home in the area. He said, “We’ve both had 35 years on the ash carts. We live here happily together. It suits us and we’re never badly*. Course we don’t want to move!” “I spent four years out in France without a scratch. Now, after five years here they want me out, and it’ll be the fourth time.”
At 16, Rosegarth Street, Mr. and Mrs. W. Hough, with a growing family, took a different view. Said Mrs. Hough: “We’ve always lived in old houses and it will be a pleasure to get away from this and into a decent one. We’ve no bath and no electricity, and the place is damp.” 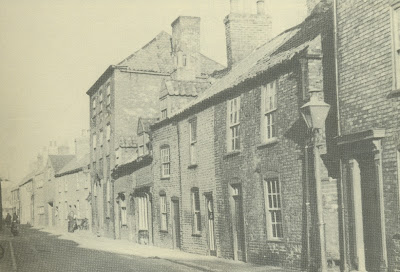 Rosegarth Street.
At her grocers shop in Lincoln Lane, Mrs. May Peacock, was worried. “I’ve been in this shop for 24 years, the ground opposite has been waste all that time and we want to know definitely what’s going to happen, and when. This shop is my living.” 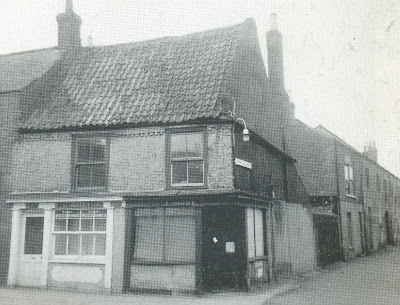 The corner of Stanbow Lane and Pinfold Lane.
So, back to today, it was all eventually “rejuvenated” and on the characterless, red-bricked site now (2011) among other things are the Police Station, the Department of Employment, an empty Kwik-Save supermarket and the Bus Station.
*In Boston “never badly” means you’re never ill.
Posted by Billy at 6:34 pm