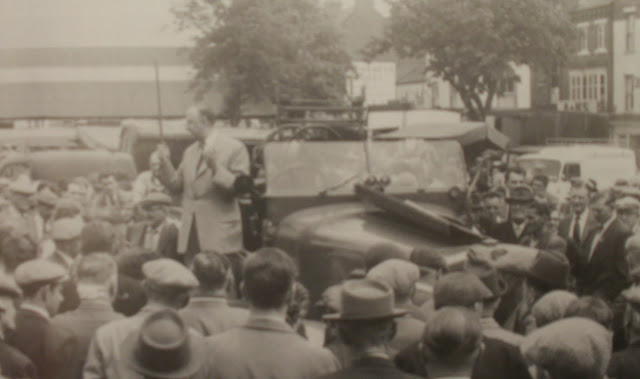 Auctioning vehicles on Bargate Green.
Then at 12 o'clock, Mr. Mather the auctioneer began to sell. Spectators waited for him to reach the bus. Twelve thirty arrived and with a cry of, "Who will have a ride with me for nothing." from Mr. Mather, the sale was on.
"This would make you two or three very good poultry houses - how much am I bid?" he called.
Thank you, I will take 20, but I can't include the boy I'm afraid," he laughed, pointing to a grimy faced child who had poked his head from an upstairs window. The bids came in steadily - 25-30-35-40-45. "Think of all the spare parts," said the auctioneer. Buyers continued to call - 50 - 55.
"Think of all you could do with this," went on Mr. Mather. At £55 he was "giving it away." but there were no more bids, and at £55 he gave it away to Mr. P. Sutton of Mareham-le-fen.
Mr. Sutton said that he intended to keep poultry on the bottom deck and use the top one for storage purposes. He thought he might take off the wheels and use them on a trolley.
It was not known how the bus came to be on the market but it was thought to have been entered for sale by a person from Long Sutton.
Posted by Billy at 6:58 pm